Our Harris Teeter store, in a new 100,000 square foot space, finally joined the ranks of other retailers in offering early shopping hours for those over 60 years of age. It begins at 6:00 AM (apparently they don't think we need our sleep) and is only on Mondays and Fridays, but hey,  it's something. Jim was there a little after 6 this morning, and found a crowded parking lot and store with no chance of maintaining 6' of distance from anyone. The whole point is to get the more vulnerable population in and out of the store before it gets busy. He said a number of the shoppers were well below the 60 mark too. No respect...

He headed immediately to the toilet paper aisle where, wonder of wonders, there was actually some on the shelves for the first time since this pandemic was given its illustrious name. We hadn't seen TP at any of the stores we have visited. TP was definitely on the endangered species list. He was able to get the three packages that are allowed due to rationing (thanks, hoarders!), but he also scored two small containers of antibacterial wipes. They are cherished possessions as they've been as scarce as hen's teeth as well. He quickly grabbed the handful of other items on the list, and found a brisket to smoke for dinner tonight. Then he dashed to the car to secure the much sought after items in the back of the car before the shelves again emptied. Since we are now being advised we will have to stay home through April, it feels good to know that we are set with our paper goods for now. What a world!

Jim smoked the brisket all day, and it was amazing. We have leftovers to freeze, and those will come in handy for a couple of quick, easy meals down the road.

The photo scavenger hunt contest was due today. Only three of us submitted our collages, so the lifestyle director just threw all the names in a hat to find the winner of a $100 local restaurant gift certificate. My name was not drawn (pretty sad when I had a one in three chance of winning), but here are the 45 photos I submitted. The first grouping was based on the alphabet, obviously, and the last seven had to be colors of the rainbow: red, orange, yellow, green, blue, indigo and violet. The second collage was something crooked, straight, soft, smooth, rough, old, new, tiny, huge, high, low and beautiful. It was a fun way to occupy some time. 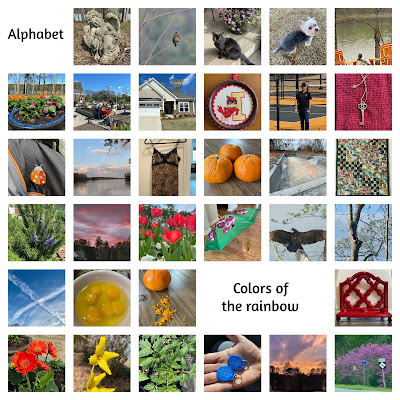 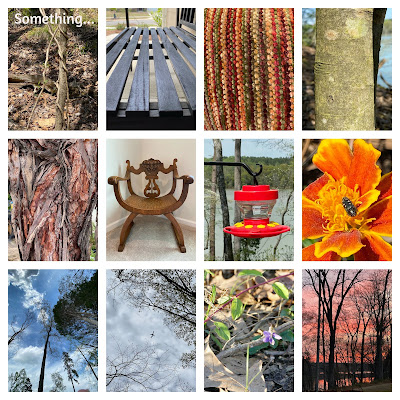 Posted by Kim Wolterman at 8:25 PM No comments: Links to this post

Our calendar used to be chock full of activities for our community as well as various pickleball outings. Now we daily use White Out to remove said activities one by one. We are keeping busy with walks through the community and chatting at a safe distance with other neighbors. Last night eight of us gathered in the yards behind our house and the one next door. Keeping a safe 6' apart, we placed chairs in a circle. Sipping our own beverages, we spent a few hours catching up and discussing anything but COVID-19. It was so nice on a beautiful evening to feel somewhat normal again. I know how fortunate we are to be in a situation where we can get out and enjoy nature, as well as communication with others. I feel for those who are confined to a small apartment in an urban area as the sense of isolation must be huge.

I gave Jim a new camera for his birthday earlier this month, and it is the newer version of the one I own. We have spent quite a bit of time practicing shots together and apart. As one who has never been that comfortable taking my camera off of automatic exposure (don't judge-it takes great pictures), I am finding it extremely helpful to learn what else my camera can do by watching Jim work through his new one.

The community Lifestyle Director is currently running a Photography Scavenger Hunt. She sent out prompts for things to photograph, and we are to compile our photos into a collage and submit them to her. As the first prize is a $100 gift certificate to a local restaurant, I decided to submit. Though God only knows when I would be able to use the certificate should I win. There are 45 items on the list. The deadline is tomorrow, so once I hear who wins I will post my submission here. In the meantime, here are a few of the birds who have been visiting our yard.

Posted by Kim Wolterman at 3:01 PM No comments: Links to this post 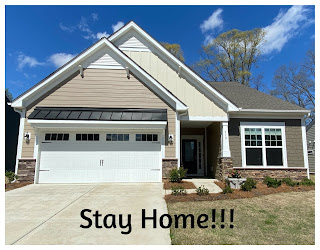 While this has already happened in other areas of the country, today was the first day that my town of Mount Holly and my county of Gaston issued Stay at Home Orders due to COVID-19. Basically we are not to go anywhere except to the grocery store, doctor's office or hospital if needed, pick up restaurant food, and go to work if your employment is one that is "essential". Most people who can have already been working from home for a week or more. We are allowed and encouraged to go outdoors as long as we keep 6 feet away from others and don't congregate in groups of more than 10 people.

We had already been minimizing the amount of trips we make to the grocery store, and at any rate they still don't have any disinfecting supplies, antibacterial liquid soaps or toilet paper. (And none of those items are available online at any price.) Jim found a small meat market that is selling TP by the roll, so we purchased a few of them. That is a great way to keep people from hoarding it. We had to pick up some building supplies for the house yesterday, so we went ahead and bought some flowers and vegetable along with potting soil. The day may come when they don't even allow us to go out for those kind of things.

Today we went to our community garden plot to plant the tomatoes, peppers and marigolds. We are allowed to tend to the garden because it is a) agricultural and b) a community service garden where 10% of each plot's bounty is donated to the food pantry and Meals on Wheels. So they definitely want to make sure that we get our gardens up and running. We just have to wear gloves, use our own tools, and keep the 6 foot distance between us and others. It was no problem as there was only one other person there at the same time as us. It is a little early to plant, even for this area, but the temperatures will be in the 80s for the next few days, followed by a couple rainy days. Hopefully there will not be a late frost.

One of our neighbors had the idea to place inspirational messages on sidewalks using chalk. She has chalk packages on her front porch for anyone who is interested. What a fun idea, and then people walk through the neighborhood reading the messages. Of course we wanted to participate, and we used Pooh and Eeyore for our quotes. I just love the creative souls around here.

To say things are strange right now is certainly an understatement. Charles Dickens had it right when he wrote, "It was the best of times, it was the worst of times."
Posted by Kim Wolterman at 6:32 PM No comments: Links to this post