When Jim and I were first married we alternated holidays with our parents on Thanksgiving and Christmas. We did not live in the same state as them, so both trips involved fairly long drives. The weather was often a problem for us. A few years after we had Andy, we decided it was too much to make both of those trips, so we stopped traveling on Thanksgiving. Sometimes whichever set of parents was not going to see us at Christmas came and visited us for Thanksgiving.

Andy and Megan have had the same tradition going since they got married, except they would normally fly home for Thanksgiving since it is a long drive from the Washington, DC area. This year they decided to stay in DC for Thanksgiving, as they will have a longer break at Christmas and will be able to spend several days with both families at that time. Jim and I flew out to see them instead. We have never flown on this holiday before, and so we were part of the 43.5 million people flying for Thanksgiving. Somehow we were given TSA pre-check clearance for the flight, and didn't have to stand in the long security line.

Since Katie is relatively new at her job, she did not have any time off accrued. But her boss said that if anyone wanted to work Thanksgiving day (it is an international company so their customers would not be closed), they could take Friday off instead. So she worked that day and then took a red eye from Los Angeles to DC, arriving around 6:00 a.m. Friday morning.

We got in Wednesday around dinner time, so Andy and Megan picked us up and we went out to eat. We decided to celebrate Thanksgiving on Friday when Katie could join us, so on Thursday we went downtown to look around. It was surprisingly busy considering most people should have been at home making their turkey dinners.

Friday was kind of a lazy day. The kids hit some door buster sales, but didn't really find too much. Jim and I took a long walk on a wonderful trail that is right by Andy and Megan's condo. We came upon a dog park that had to be five acres in size. It was amazing to see all the dogs playing with each other. For our Thanksgiving meal, Megan prepared Cornish hens with dressing, mashed potatoes and gravy, a lettuce salad, and green bean casserole. For dessert, Katie made sweet potato cupcakes with toasted marshmallow frosting, and Megan made a chocolate mousse pie. Delicious! 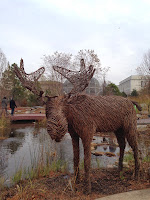 On Saturday we went back downtown to the United States Botanic Garden Conservatory. None of us had been there before. Part of the gardens are outside, but most of the displays are inside. As it was quite chilly, we were thankful for that. It was very crowded, but we managed to enjoy the experience anyway. From there I had suggested that we go see the Basilica of the National Shrine of the Immaculate Conception, which is across from Catholic University. I had seen reviews on TripAdvisor that said it was nicer than the Cathedral Basilica St. Louis, and I just couldn't imagine that being the case. I also commented on the fact that we always seem to seek out churches when we travel abroad and never take the time to see the ones here in the United States. Am I glad we went to see it! It is truly beautiful, and is at least on par with the cathedral here in St. Louis in the interior anyway.


That night we had pizza in the condo, and played Five Crowns which is a card game. Jim and I played it for the first time this summer, so I picked up the game for the trip. We had a lot of fun playing, but I am just going to say that my family is pretty competitive!

Jim and I had a noon flight on Sunday, so after breakfast the kids took us to the airport. It was an easy traveling experience, despite the crowds. Katie's flight was early Monday morning, so the three of them had some time alone together, which was nice. They went to see the new Hunger Games movie, and then played cards that night.

It is hard to believe in a few short weeks Andy and Megan will be driving here for Christmas. We will miss Katie this year as she is unable to get any time off, and that makes me sad. Sounds like we will be having a non-traditional Christmas this year, too. 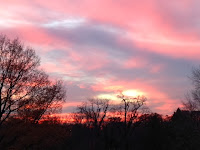 Beautiful photos as is your standard.

No one has more fun than you, although I understand it will be less fun sans Katie for Christmas. Maybe the bright lights of LA will beacon you to book another flight?