Saturday Jim and I went to a family picnic at the St. Louis Zoo, courtesy of the general contractor on the new sea lion exhibit. All of the subcontractors who worked on the project were invited to bring their families for the day. We arrived a little after 8:00 a.m. while it was still fairly cool outside. We were given special brown arm bands, which allowed us to get into the paid activities at the zoo and also into the lunch tent. Having the band was great because normally we don't go into any parts of the zoo that charge an entry fee.

We began the morning at the sea lion exhibit, because we knew how crowded it would get later in the day. It is so awesome! First of all the new outdoor area is so much nicer than what they had before. But the indoor water tunnel is just great! It was fun to listen to the exclamations of the little kids. They also have a huge glass wall outside where you can watch the sea lions as well.

Happy Feet, the motion simulator, was another one of the attractions we were allowed to enter for no charge, so we decided to see what that was all about. There were only two other people in there with us, and I think it would be more fun when filled so you could catch the excitement of everyone else. We still had a good time as our seats twisted and turned, wind blew in our faces, and things touched our ankles and the back of our heads. And there was some water spraying in our faces at times as well as we watched the movie.

Next up we rode the carousel and then stopped in to see the penguins. One of the little devils took his flipper and sprayed me right in the face. Let alone having the stinky water dripping from my hair, my mascara immediately began to run into my eyes and down my face. Of course I had no tissues in my camera bag, so we had to beg a food vendor for some napkins to try and repair the damage. I had been a little worried about having b.o. since it was getting so hot out. No worries - I simply smelled like rotting fish instead!

Since I had already had a close encounter of the smelly kind with ocean dwelling creatures, we went to the stingray pool next. You can put your hand in their holding tanks and touch them on their backs. There are sharks in there as well, but you are only supposed to touch them if they touch you first. The smaller stingrays felt kind of slimy, but the big ones felt like velvet. They also have a separate pool for baby stingrays, where you could look but not touch. Those little suckers are really fast swimmers! 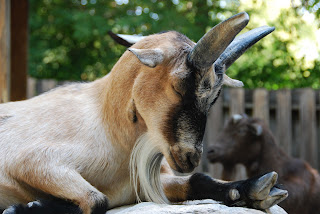 We then entered the children's zoo, and found this guy sunning himself on the rocks. He certainly was very content. After that it was time for the sea lion show. Our assigned time was 11:00, and we were told to be there 30 minutes early. They had reserved an area for our group at this show and the 1:30 show, but those seats would be released 10 minutes before the show began. I was grateful we got the first show before it got too hot, and getting to the seats early ensured that we got a place in the shade.
I have not been to a sea lion show in years, and this one was pretty good. 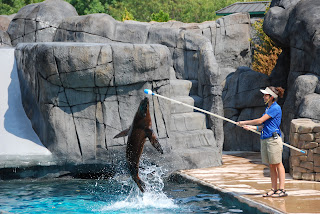 The show finished up in time for us to head to the food tent, where they had a buffet lunch set up for us. Everything was quite tasty, which is hard to pull off when you are feeding a large group of people - especially outside.

The last thing we wanted to do before heading home was to ride the train. I think the last train ride we took there was with my brother and his kids quite a few years ago. It almost made me want to go to Six Flags. Almost. All in all, we had a great time, and everyone who worked on the new exhibit should be very proud of the way it turned out. 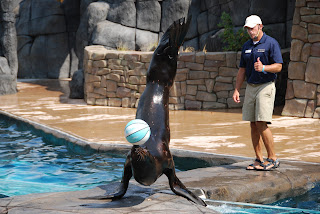 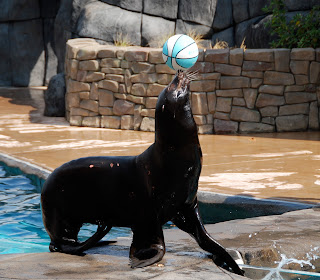 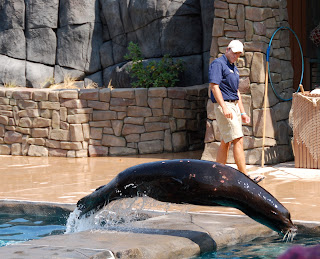 I love dem sea lions from the tips of their whiskery noses to the ends of their flippery tails.

Again, you have all the fun.