Back to the Empty Nest

The house is empty again. Even Jim and the dog are over at SWT right now. After a houseful of people and nonstop activity the last five days, it is nice and quiet here. Maybe too quiet.

Andy and Megan flew in last Wednesday morning, and after picking them up at the airport we drove to Pappy's to attempt to get some barbecue. Ever since Andy saw this restaurant on "Man Versus Food", he has been dying to go there. I dropped him and Megan off at the line forming outside the door and went to find a place to park. Before I even got out of the car, they were back at my door saying that a lady had come out of the restaurant advising that there were at least 100 people waiting inside for a table! Not having the time or the inclination to wait in the rain for that long, we went to Seamus McDaniels in Dogtown instead. We got home in time for us to let the dog out, then Jim and Andy went to Union Station to pick up Katie from the MegaBus stop. Megan and I waited at home for JoEllen and Bruce to arrive. Oh, and their dog, Casey.

We had a nice supper and then played Sequence for awhile. Thursday was non-stop action preparing the turkey and all the fixings, and then JoEllen and Bruce headed back home to Kansas City since she had to work the next day. On Friday morning Megan's mom, dad and two brothers drove over from Indiana to spend the day with us. The guys all went to Cabellas and the gals stayed here and got caught up. We ordered pizzas, watched some football and some of the group played Euchre for a bit before the Englert's had to leave. Friday night Jim and I went to the Webster Groves State Championship game at the Jones Dome (where Webster was beaten by a phenomenal Kansas City area football team), Andy went to the Casino Queen, and Katie and Megan hung out at the house.

Saturday Jim, Andy, Megan and I went to the botanical garden to see the train show while Katie did homework, then we went to our favorite Chinese restaurant for supper. Katie went back to Chicago on the train this morning, and we dropped Andy and Megan at the airport this afternoon. As soon as Jim gets back from the office we are going to the gym to see if we can undo some of the damage of five days worth of company. More than the bird was stuffed this holiday!
Posted by Kim Wolterman at 4:00 PM 1 comment:

Down the street from me lives a woman who is 95 years old and living once again in the house she was born in. It's a fun story in and of itself as she (I'll call her V) is living with her 85 year old boyfriend (I'll call him D), who actually owns the house now. I was thinking that it would be really interesting to interview her to talk about what it was like growing up in Webster Groves. After all, she probably knew the Morton family who built my house. They lived here until 1938. I understand my neighbor's mind is very sharp, even if her body is failing her. And she loves to talk!

I was trying to figure out how to go about seeing if she would mind answering some questions for me. Well, yesterday while walking the dog I saw the boyfriend (tee, hee!) talking to his next door neighbor, whom I do know. Always one to try to answer when opportunity is knocking, I hurried up my friend's driveway to introduce myself. As I explained why I was interested in speaking with V, D quickly expressed that V would love to talk to me. She loves discussing old times. As she feels best in the afternoons, we agreed that I would just come over one day after Thanksgiving around 1:00. After D went back to working in his yard, my friend said, "You're going to write about this, aren't you?" It ends up that she knows a lot about the neighborhood as well, and she had some suggestions about other elderly people that I should interview before it's too late.

So I may be on to my next book idea. We'll see how this first interview goes.
Posted by Kim Wolterman at 8:49 PM 1 comment:

I Got "High" Last Night

Last night we went to see the play "High" at the Repertory Theatre. I didn't know much about the play other than the fact that it starred Kathleen Turner and involved a young man with a drug addiction. Oh - and it was listed as being for mature audiences. I try not to talk to other people who have seen plays I am going to, and I don't read reviews because I so infrequently agree with them once I see the play (or a movie, for that matter). It was tricky with this one because lots of people were excited to have Turner in town, and our tickets are the last night's show. This play was actually written by a man who has a drug addiction, but who has been clean for 3 years now. There are predictions that it will head to Broadway, and I can see that happening.

There are only 3 actors in the play - a nun (played by Turner), a priest (Michael Berresse) and the young man (Evan Jonigkeit). While the subject matter is serious, there were some surprisingly funny moments in the play. The set was clever yet somber and didn't detract from the play. All 3 of the actors were excellent, with Jonigkeit doing an exceedingly credible job of portraying a drug addict. It was pretty obvious that Turner was not feeling well as she coughed a lot during the production. But she hung in there, and looked very relieved when her last line was delivered. The play has some interesting twists, and is definitely thought provoking. I "High"ly recommend it.
Posted by Kim Wolterman at 8:36 PM 1 comment: 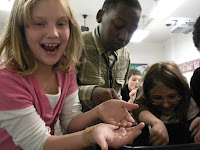 But they were great, and I think they enjoyed talking about recycling and composting. And maybe a few will take something home from today and make some positive changes in their own lives.
Posted by Kim Wolterman at 8:12 PM No comments: