A New Branch on the Wolterman Family Tree 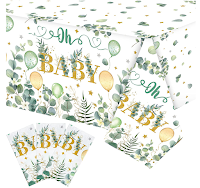 Back in May I had the best Mother's Day ever. You might think that it was because we hosted two pickleball pros at our house for several days. Or that by volunteering for the PPA pickleball tournament in Charlotte I was able to see in person many of the professional pickleball players that I watch on t.v. and YouTube. But it was something way more exciting and long-lasting that occurred that Sunday afternoon. Our son and daughter-in-law called to tell us that we are going to be grandparents. This will be our first grandchild, so to say that we are over the moon is a vast understatement.

We were asked not to say anything about the baby for a bit. Like many couples, they wanted to get through the first trimester before making any big announcements. As they are a little bit older, there were also some additional tests that needed to be run.

All the big hurdles have been passed, and our granddaughter should make her debut around the end of November. We do not know her name yet, so we have been calling her Baby Dub. A baby shower is planned for September 24th in Indiana. I volunteered to make a couple of diaper cakes to adorn the food and gift tables. I had never made one before, but there are so many great ideas on the internet. The biggest surprise was the cost of diapers. Oh my!

I've got the cakes made and wrapped in plastic for the transport north in my car. (I should mention that I was asked to use a minimal amount of pink.) In addition to the diapers I have decorated the "cakes" with items the baby/parents can use, such as baby wipes and wash, Desitin, washcloths and towels, pacifies and holders, a baby book, etc. Even the cake plates are covered with swaddle wraps. I'm pretty excited about how they turned out, and it's nice to know that the centerpieces are made of practical items.

In addition to the cakes, I have made the baby a gift. I won't mention what it is until after the shower. I don't think the kids read my blog, but there's no reason to spoil the surprise in case they do. In a few weeks we will see the expectant mother for the first time. That will make the pregnancy more real for us. We are still pinching ourselves over the news.

And in late November or early December, the Wolterman family tree will have a new branch. I just wish our parents were here to celebrate the occasion.

Posted by Kim Wolterman at 6:26 PM No comments:

Friday was our 44th wedding anniversary. It's hard to wrap my head around that. We met at Iowa State University when we were 18 years old, and started dating a few months later. We married shortly after graduation, and relocated to St. Louis where Jim had secured a job. In St. Louis we completed master's degrees, raised a family and built a good life.

When we retired to the Charlotte area nearly three years ago, we didn't know anyone or much about the area. It was a huge leap of faith to come here, and only a strong marriage could survive the stress and upheaval of the massive move. During one of our three years here we buried both Jim's mom and dad, and my beloved sister. Having someone to share the grieving process with made all the difference in the world in how we coped with the huge losses.

The support network within our new community is phenomenal as well. Because we are in a 55+ community, we have experienced many deaths already. But I think most of us moved here in the hopes that the community will wrap us in a loving embrace when we experience a severe health issue or death in our family. That has certainly proven to be true so far. I am confident that when something happens to me or Jim, our neighbors will rally around the survivor. And the community will share in the grieving process.

Getting back to our anniversary, we didn't do a lot to celebrate this year, save for going out for a meal at one of our favorite restaurants. It offers waterside dining, so we always know we can sit outside. But as next year will be the 45th anniversary, we are already thinking of something big to do in honor of that occasion. We are both eager to cruise again, but there are still so many people getting Covid on the ships that it just doesn't seem worth the risk yet. Maybe by next summer it will be more under control. Who can say?

Posted by Kim Wolterman at 4:20 PM No comments:

We recently returned from a pickleball clinic in Beech Mountain, North Carolina. We stayed at the Pinnacle Inn because back in January when we signed up, this is where most of the more advanced play was supposed to take place. Unfortunately they had problems with their courts, so everything was moved to a recreation center. That was okay as we had both indoor and outdoor courts available to us, though they were not dedicated courts.

It was a relief to be in the mountains, where the temperature was 20 cooler than back in the Charlotte area. It was unusually rainy (and foggy) though, and a local told us they were experiencing more fall-like weather than summer. The clinic ended up to be just okay, but the chance to play lots of pickleball and meet up with friends (both old and new) made the trip worthwhile.

We stayed an extra day so that we could do some hiking in the area. It was not crowded, and we found some waterfalls. Overall, it was a nice getaway for a few days. 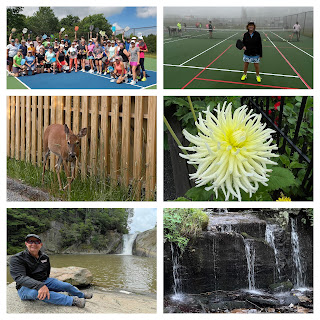