Gazing into My Crystal Ball

Saturday four of us from my Women in Focus photography group got together to take pictures using crystal balls. What a unique way to look at things! While the temperature was a fairly balmy 66 degrees when we met at 9:00, the forecast was for rain and high winds. We decided to go for it anyway.

We first drove to the Malcolm W. Martin Memorial Park in East St. Louis, which offers possibly the best views of the arch and downtown St. Louis. It is a little remote, but there was actually one other person there taking pictures when we arrived. It is here that I fell in love with my crystal ball. I can see that I'll have lots of fun using it as a photography prop.
From there we drove to Bellefontaine Cemetery in north St. Louis. One of the most beautiful cemeteries in St. Louis, Bellefontaine is also the final resting place of many of the Who's Who in St. Louis history. While at the cemetery, the winds picked and the scattered clouds added to the mood of the setting. The 20 plus degree temperature drop and rain we could have done without though!
I found it somewhat ironic that a rafter of turkeys was hanging out in the cemetery right before Thanksgiving. Hiding in plain site? Gobble, gobble - Happy Thanksgiving!

Posted by Kim Wolterman at 9:56 AM No comments:

Fall is All Around

Though we had a lot of rain this spring, the summer was fairly dry in my area so I wasn't sure what the fall colors would be like. Holy cow, over a couple of days last weekend things exploded! It's like an artist sat down with a paintbrush and cut loose. Our maple tree out front changed dramatically from Friday to Sunday. 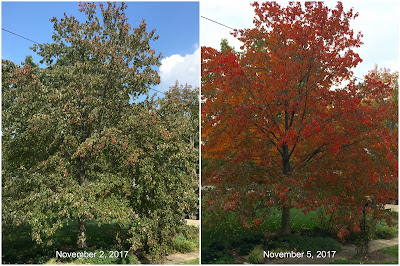 On Wednesday I took off to try to capture some of the glorious colors around me. I'm so thankful that I follow other photographers on social media as I learn where all the cool stuff is taking place. My first stop was to the Missouri Botanical Garden. I had just been there a couple weeks before, and not much color was showing. This visit was totally different, and fall color was abundant.

After the garden I drove to nearby Forest Park. The colors in the park were outstanding as well. Since it was not too crowded, I drove to some areas of the park that I had never been to before. It was just lovely, and as an added bonus I hit my 10,000 steps before even leaving the park. Now that's my kind of exercise!

Posted by Kim Wolterman at 1:27 PM No comments:

These Tomatoes are no Joke

A couple of years ago a few rogue tomato plants popped up in our front planting bed. There must have been seeds in the mulch because I don't put in any vegetables. Between the bunnies and the squirrels, it is an exercise in futility. The bed isn't the best for tomatoes as it only gets the morning sunlight, but for whatever reason the tomatoes took off. They were cherry tomatoes and delicious in salads and just as a snack. And oddly enough, the squirrels left them alone.

Last year a couple new plants popped up, in addition to a couple in the original location. But this year they was an explosion of plants in the front yard. There were seven or eight in the same beds as last year, but five more came up in the bed on the other side of the front walk. All of the plants were quite prolific, despite receiving zero care from me. You know darn well that if I had planted tomatoes, this would not be the case.

With the frost warning approaching, we picked all the tomatoes on Sunday, red and green ones alike. I filled a huge silver bowl, and Jim nearly filled a large bucket. What to do with all of these tomatoes? I read and dismissed dozens of recipes, particularly those that required a food processor or any straining of the tomatoes.

Monday I made some Sweet Tomato Jam, which has an interesting mix of spices and jalapeños in addition to sugar and some honey. But that sauce had to cook for two hours, and in the end I got two and a half pint jars of the jam. Way too much work for too little reward. I can't see eating this on toast, but I will say that it was good on tilapia.

Tuesday I decided to modify a Pepper Jelly recipe that came with my jam and jelly maker. I substituted the tomatoes for the green peppers, cooked it in the jelly maker, and then processed the four pint jars the recipe yielded. I haven't tried it yet as it didn't seem like it would go with the Halloween candy I was eating last night. Why did the tomato blush? Because it saw the salad dressing.
There were still pounds of tomatoes left, so I froze them today. I now have four quart size bags in the freezer. That buys me time until I decide what to do with them. I know I want to make some tomato juice in the Vitamix blender at some point.

All this work makes me relieved that I don't have a large garden on my yard. I don't know how our foremothers did it all. What I do know is that some of the rogue tomato plants will not see the light of day next summer. Enough is enough.

Posted by Kim Wolterman at 8:14 PM No comments: