A shutterbug is defined as an enthusiastic amateur photographer, so that seems an apt title for this post about a recent photography event in my community. While we had a small group of photographers here at Imagery who met a few times before Covid-19, it all sort of fell apart during the pandemic.

Last month a representative of the Charlotte Art League came here to do a presentation, "Exploring Life Through Photography". He offered to work with our community through ongoing photography workshops.

Saturday at 10:00 a.m. Jim and I attended the first meeting, entitled "Explore Your World Through Photography", with 11 residents in attendance. The goal is to keep the meeting to 15 or fewer people for the sake of field trips and photo review. We had a brief introduction, and then split up to go and photograph a defined area of our community.

We met back up at noon to debrief, and we are each to send our workshop coordinator 10-15 of our favorite photos. He will put them together in a slide show, and we will meet again on the 30th at 6:30 p.m. to review the photos. The goal is not to critique the photos but rather to understand that while we all may be looking at pretty much the same things, we experience them in different ways.

I am very eager to see what everyone comes up with for this challenge. In looking at Jim's photos, while we both shot a few of the same items even though we weren't walking around together, what we focused on in each of the scenes was totally different. That is usually the case when we go out shooting together, so it didn't surprise me one bit. Will that prove to be the case with the rest of the group? It will be interesting to see!

Posted by Kim Wolterman at 7:07 PM No comments:

The City of Angels

Our daughter had a big birthday this year, and since she couldn't go on the adventure she had planned due to Covid-19, we decided to have a family vacation in the Los Angeles area to help her celebrate. It was the first time that I have flown in over two years. From the time we entered the airport in Charlotte until we got our bags in LA we were masked - so over eight hours straight. I have so much sympathy for people who routinely wear a mask for that amount of time (or more) due to their jobs. It's a challenge!Our son and daughter-in-law arrived at LAX a little before us, so we met up and went to get the rental car before heading to pick up our daughter. The five of us shared an Airbnb in Malibu for a week. The house was perched on the side of a mountain, and offered mountain views as well as ocean views. It had a small outdoor gym, a hot tub, grill and outdoor tv on the deck, and a pool table inside as well as three bedrooms and two baths. It was perfect for our family.

While the temperatures were unseasonable hot (in the 90s) for a few of the days, we made the best of the situation by doing our sight-seeing in the morning to avoid the heat. We left the air conditioned spots for the afternoon, or just headed back to the house to play games or just hang out. Highlights of the trip included custom gin and tonics on a rooftop patio, the Getty Museum, Huntington Garden, Getty Villa, and a visit to a local wine shop. Face masks were required everywhere when indoors, and even outdoors if you hadn't been vaccinated or were walking to an outdoor table to eat and/or drink. 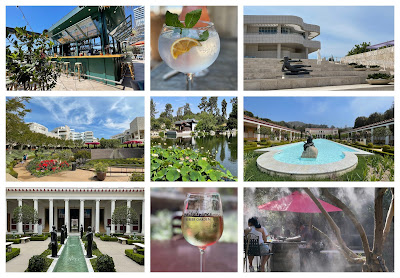 But of course the best part of the trip was being able to see all of our immediate family for an extended visit. Priceless! 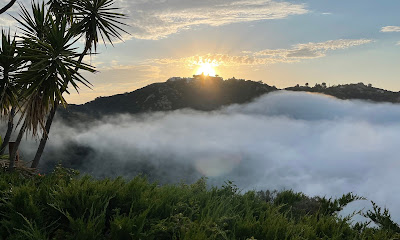 Posted by Kim Wolterman at 1:26 PM No comments:

They Shoot Horses, Don't They?

In December of 2019, Jim gave me a gift certificate to a workshop photographing the wild horses of the outer banks. Originally scheduled to meet the first week of June of 2020, it was canceled due to Covid-19. We rescheduled it for the same time this year. We have anticipated this trip for a year and a half, and on Tuesday, June 1st we took off for our Airbnb, located in Kill Devil Hills, NC. 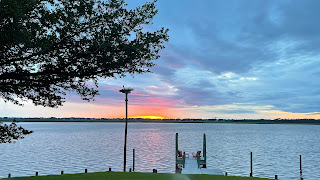 Following a leisurely, if a little boring, drive from Mount Holly to the outer banks, we settled into our home away from home for the next six days. Located on Blount's Bay, the unit afforded nice sunrise photo ops - assuming the sun decided to show its pretty face. All along the forecast for the first few days we would be visiting called for rain, but we were hoping the forecasters would be wrong as they so often are. Unfortunately that did not end up to be the case. 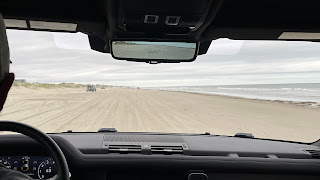 While Wednesday morning dawned with a peek at the sun, the day grew more gloomy. We met up with our other two workshop attendees and the instructor at 3:30 that afternoon in Historic Corolla Park. He took us in his four wheel drive Land Rover Defender onto the beach to search for the horses. I was amazed by the number of cars, trucks, etc. that were traveling on the beach, and by the amount of commercial horse hunting vehicles that were in the area. In my mind, I expected this trip to be sparsely populated and not commercialized. This was a vastly different experience than our time shooting the wild horses of southern Missouri. Disappointing, really.

We were supposed to do sunset photography that evening, but of course there was too much cloud cover for that, and the rain started up again as well. Thursday morning we were to meet back in Corolla (about a 45 minute drive for us) at 5:00 AM to photograph the horses on the beach at sunrise. The instructor said he would text us at 3:45 AM to let us know if it was a go or not. The forecast called for a 90% chance of rain, and in fact the rain did not let up all night. But we diligently set out alarm for 3:30 and began to get ready just in case. At 3:45 the shoot was canceled. He said we would meet him back at the same park at 1:00 that afternoon instead. We were able to go back to sleep for a bit, and ended up doing a little exploring in the park until it was time to meet up with the group again. 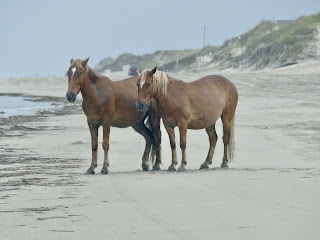 By the time we got together it was raining pretty hard. He decided to take us out on the beach again anyway. While we did see two horses, it was not an enjoyable experience trying to photograph them. Not to mention the fact that none of us wanted to damage our camera equipment. Around 2:30 we decided to call it quits. The instructor suggested we meet up at a restaurant at 4:00 to maybe go over some photos and discuss them. While we did meet for dinner, no photos were brought out. And we canceled Friday mornings activities as the forecast was more of the same. So, our two and a half day workshop was condensed down to a handful of hours. As I said, very disappointing.
The rain continued all through the night and into the next morning. We had our place reserved until Monday morning, so we went out to have a nice breakfast and hopefully wait the storm out. When the weather broke we checked out the Wright Brothers Museum, the Outer Banks Arboretum, and the Monument to a Century of Flight.

Saturday and Sunday consisted of visiting the piers, lighthouses and preserves of the southern portion of the outer banks. That area is much less congested and way less touristy. While it was hot and humid, we at least had no more rain for the duration of our time there. Monday we headed for home, stopping at Lake Mattamuskee (the largest, natural fresh water lake in North Carolina), Bath (the oldest town in North Carolina), and Wilson (home of the largest whirligig collection in the US. 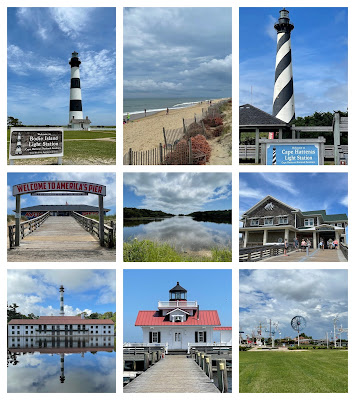 About 110 miles from home, an indicator light came on in the car that the drivetrain was experiencing a malfunction. We got off the highway and did a Google search on the problem. Everyone suggested that it was okay to carefully drive the car so we decided to limp home. Then we hit a huge rainstorm, and the transmission really struggled. But we made it back, took the car in the next day, and had it repaired. What an ending to what should have been a dream Christmas present! And I will add that although we wore our masks whenever we were inside (despite being double vaccinated), hardly anyone else including employees did so. Between that and the crowds, people seem to think there is no longer a pandemic.
Posted by Kim Wolterman at 7:29 PM No comments: