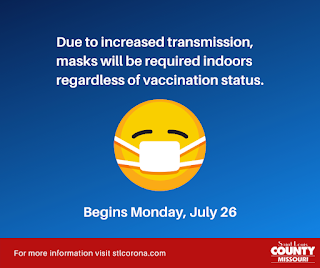 While Los Angeles last week announced that masks will be mandatory when indoors regardless of vaccination status, other areas are beginning to follow suit. St. Louis County's new mandate goes into effect July 26th. All 50 states are experiencing a surge in Covid cases. We used to hear vax it OR mask it, but now it's vax it AND mask it.

The CDC has not publicly announced that they made a huge mistake in relaxing mask requirements back in May, but they really need to own up to the fact that they should not have stated that vaccinated people no longer needed to wear a mask while in crowds. Expecting the unvaccinated population to do the right thing and mask up was just ridiculous. And the increasing numbers of cases and hospitalizations is proving the point.

I made the comment to my neighbor, who is a physician, that I can get the shot and not have too much impact on anyone else's life but my own. But a person who refuses to get the vaccine can have a huge impact on my life. We all may have to go back into full masking requirements, if not total lockdown, because of the people who will not get vaccinated. There are about 1,000 counties in the U.S. with vaccination rates of less than 30%. Less than half of the U.S. population is fully vaccinated.

Without the numbers needed to create herd immunity, we will continue to see variants of the virus as evidenced by the one called delta. And now the first case of a mutation called lambda has been discovered in Texas. At some point, the existing vaccines may not protect us from these new variants. We really need the vast majority of the population to get vaccinated before we all end up in full lockdown again. Or worse.

Posted by Kim Wolterman at 5:32 PM No comments:

Surgery is a go!

Finally I received a mailed letter from my insurance company stating that my shoulder surgery and the anesthesia has been approved. They then went on to say that they might not pay for it, however. Huh? The correspondence went on to give a laundry list all the reasons why they might not pay. I don't think any of their conditions apply to me, but sheesh. Way to make me feel confident in this situation - not! It's a good thing all I have to do is walk out into my backyard to find my inner peace again!

Posted by Kim Wolterman at 12:09 PM No comments:

It's been two months since the CDC (followed by most states) lifted the mask mandate in the United States. I expressed my concerns about this decision in my May 15th blog post. So now that some time has elapsed, what has happened with Covid numbers in this country?

Fueled by the new Delta variant of the virus, which is more easily transmittable, U.S. cases as well as deaths are up significantly in the past couple months. Experts have been quoted as saying that this is now a pandemic of the unvaccinated as they account for 97% of the hospitalizations here. Cases are up in 49 states, despite the fact that 336 million doses of vaccines have been administered. Only 48.9% of our population has been fully vaccinated.

What has been the response to the rising case numbers? Los Angeles County in California is the first to take a step backwards and tighten restrictions. An indoor mask mandate has been put back in place, regardless of a person's vaccination status. Seven other California counties also issued mask mandates, despite the fact that California just lifted all restrictions on June 15th. Will other communities follow suit?

My observation from being out and about is that people are acting as if there is no pandemic. They are crowding into restaurants, concerts, amusement parks, stores, etc. My husband and I are still wearing our masks when indoors, but we rarely see anyone else doing so. Can you imagine trying to get all these people to start wearing masks again? It will be like trying to stuff cats in a bag. Stay safe out there!

Posted by Kim Wolterman at 7:33 PM No comments:

When I talked to the representative at the insurance company, on a phone call that lasted a total of 1 hour and 25 minutes, she advised me that there are no anesthesiologists within 100 miles of where I live who are in network. I should mention that I am in one of the largest medicare supplemental plans in the U.S., and I live in a metropolitan area with a population of 2.6 million people. How is this even possible? I told her it makes it pretty difficult to have surgery when they don't have any anesthesia groups in the plan. She put me on and off hold listening to the same craptastic song over and over while she was checking with various supervisors. The end result was being told that my case was being taken under review, and I would hear in two weeks whether they would consider the anesthesia to be in network or not.

In the meantime I called the broker who sold me the plan to let her know what was going on. She has over 600 medicare clients, and she has never heard of such a thing. She told me she would go further up the ladder in the insurance company than I did, and would have an answer for me within a couple days. Sure enough, two days later she called to tell me what she learned. Apparently this insurance company has a contract with the surgery center where they cover everything that happens at the surgery center under one payment to the center. Since anesthesia falls under that, it will be covered as being in network. Because she knows what she is doing, she got this in writing.

A few days ago a different person from my insurance plan called me asking for the anesthesia code. I have no idea how they will code this procedure, and they probably don't either at this point. So obviously I am still "under review" by the insurance company. I'm sure I haven't heard the end of this yet.

Posted by Kim Wolterman at 3:50 PM No comments:

Have you ever had a frozen shoulder? It is caused by a thickening or inflammation of the capsule containing tissue in the shoulder, which restricts movement and causes pain. Sometimes it comes on gradually and other times people wake up one morning unable to move their arm.

My right shoulder froze up over a few months in 2006, to the point where I could not raise my hand high enough to brush my teeth, among other things. I had a manipulation under anesthesia (MUA), where the orthopedic surgeon moved the should to break the capsule and scar tissue free while I was under anesthesia. The afternoon of surgery a Continuous Passive Motion Machine (AKA the Chair from Hell) was delivered to my house, and I spent hours each day putting my shoulder through all kinds of different motions aided by the mechanics of the chair.

The day following surgery I began physical therapy, which lasted several weeks. There were also numerous exercises I performed at home each day as well. I felt like all I did each day was some sort of therapy. However, I had a pretty good outcome from all of that, gaining back about 90% range of motion in the shoulder.

In March of this year I began experiencing pain in my left shoulder. Even though it has been 15 years, I felt like I knew what was going on. The left shoulder was freezing up. My range of motion in the arm has continued to decrease, while the pain has increased. In reading through some articles and watching YouTube videos by physical therapists, I decided to see if I could do some exercises at home and at our gym here to try to break the shoulder free on my own. Unfortunately, the condition has worsened, so on June 23rd I went to see an orthopedist who specializes in shoulders. They took a few quick x-rays so he could rule out other causes for the pain/limited mobility, and he said everything looks really good there.

We discussed my prior experience, and my options for treatment. He advised that they rarely perform MUAs anymore as it is too easy to break the shoulder. Instead the preferred treatment is arthroscopic surgery, where he will go in and break the adhesions or scarring up. Again I would begin physical therapy the day after surgery, but they no longer prescribe the Chair from Hell, thank goodness.

Because they are saying my recovery period will be 6-8 weeks, I scheduled the surgery for August 3rd after my pickleball women's league finishes up. There is no reason to rush the surgery as far as the doctor is concerned, so I figured I might as well complete something I really enjoy doing. Fortunately this is not my dominant arm, or I would not have been able to wait on having the procedure done. As for now, I'm having fun (not!) completing the pre-surgery forms and answering all the questions from the various people who will play a part in my care. I feel very fortunate to have the option of surgery due to good medical insurance, so I'm not complaining. Instead I'll work on getting all the things done that I won't be able to do for awhile following the procedure.

Posted by Kim Wolterman at 2:06 PM No comments:

Posted by Kim Wolterman at 8:38 PM No comments:

Last night our little photography group met to go over some of the photos we had taken on Saturday. We were short three people, so I'm not sure if they just couldn't make it or if they decided the workshop was not for them.

It was fun to see what captured the attention of the different photographers. In only one case did two of us have the exact same image. At the end of our session on Saturday I shot the blue sky and clouds through a window of the building we were meeting at. Another person saw me, looked up, and took the same shot. Unfortunately we both submitted them for review. But as they say, imitation is the sincerest form of flattery, so no big deal.

After we went through all the photos we talked about places we would like to go as a group to take pictures. Several ideas were thrown out, and the workshop leader will now put together a calendar of events for the rest of the year.

Because these are not technical workshops, nor are the photo reviews meant to be critiques, I'll have to decide if I want to continue on with the group. There is a charge for each month, and if all we are going to do is take and look at pictures, I can certainly do that on my own for free.

Here are a few of my favorites from Saturday morning.

Posted by Kim Wolterman at 3:07 PM No comments: