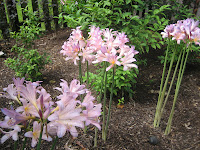 The naked ladies are in my back yard again. Good thing I have fences and other plants to help provide them with cover! Okay, get your mind out of the gutter. Naked ladies, otherwise known as surprise lilies, are plants. What's fun about them, other than their name, is that you have no idea where they are planted. They have no foliage, instead they just burst out of the ground. Thus it is always a surprise when they pop up.

We did not plant the naked ladies. They have been in the yard for the entire 22 years we have lived here, and I wonder how old they really are. They provide a lovely palette of color in the garden during a time period when not much else is blooming. My favorite naked lady story occurred about 20 years ago. My in-laws were down visiting us from Iowa. I glanced out the kitchen window and exclaimed, "The naked ladies are back!" I have never seen two people jump out of their chairs so fast. I'm surprised they didn't strain their necks when they whipped their heads around! They did not realize I was talking about the plants. We still laugh about the nudists in my garden to this day.
Posted by Kim Wolterman at 11:03 AM 2 comments:

Bean There, Done That 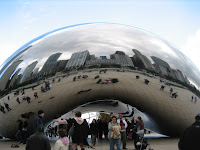 We are just home from a couple of days in Chicago, where Katie registered for her first semester of classes at Columbia College. There are multiple days of orientation, but Tuesday was one of two choices for students majoring in marketing or photography. As Katie went off to have her picture taken for her i.d., we grabbed our orientation backpack and a provided muffin and juice. As Jim doctored up his coffee, I jockeyed around the masses to grab the last table. A woman and her son quickly asked if they could join me at the table. As there were five chairs, I said that would be great. What a great way to start the day! It was very interesting to share the table with them. Michael is in the same major as Katie, and is minoring in photography, which is one of Katie's hobbies. Lynna is very personable, so we were soon chatting like old friends. They are from the Chicago area, so it was fun to get their take on Columbia. We spent the day together, except for the time period when Michael and Katie were separated to register for classes.

Katie was able to get into all the classes she had selected, so that was great. Rumor going around was that a lot of the required courses were already filled. We were happy to find out that it was not true, at least in her case. Because there are still orientations going on in early August, and I was wondering what those kids would do.

As we sat through the presentations geared towards the parents, I was excited to find that my original impressions of this school seem to be true. The level of creativity offered by the teachers, majors and college in general is truly inspiring. And all with the goal of building a portfolio to assist in job placement upon graduation. Every parents dream! I think Columbia is a perfect fit for Katie. The big disappointment in the whole day was that there were no dorms open for viewing. We had heard from a friend of Katie's who went to orientation last week that you needed an appointment to see a room. We had tried unsuccessfully to obtain one. While we saw a room back in 2007 on a campus tour, it wasn't in the building Katie was placed in nor would I remember specifics even if it had been. The online virtual tours are cool, but you can't get a feel for dimensions. So much for shopping for storage containers ahead of time!

Though all of Tuesday was taken up with the orientation, we did have time Monday and Tuesday nights to walk around the downtown area. Chicago is such a vibrant city, even in the evening. Jim especially wanted to see the "Bean" as he had only observed it in pictures. Katie and I had walked to Millennium Park when we were in Chicago in 2007. Bean there, done that.

The next trip to Chicago will be move in day August 29th!
Posted by Kim Wolterman at 8:15 AM 1 comment:

For the past week I have been watching a neighbors two cats. Each morning I go over and feed them, change the water in their dishes and scoop the litter boxes. Each evening I collect the mail and papers and give them their last feeding. And of course there is always play time. Scratch and Skippy are really nice cats, if a bit mischievous. I never quite know what I will find when I come in the back door. They have been know to open cabinets and dump the pasta all over, knock things off the counter tops, and even help themselves to the Girl Scout cookies. This week they decided dumping over the trash can in the bathroom and scattering the contents would be great fun. I can almost hear them thinking, "Let's see where she puts it so we can knock it over again!"

This morning I went over to do the regular routine. Normally both cats greet me at the door. Skippy was right there, but not Scratch. I immediately noticed the papers scattered on the floor. You naughty kitties, I thought, you have gotten into the mail. I picked it all up and called for Scratch. Still no sign of him. I went down the hallway and noticed that the bathroom door was mostly closed. Had he gotten himself shut in there? As I opened the door, I noticed a book laying on the vanity. Uh, oh...that wasn't there when I got their water yesterday. I glanced into the master bedroom and saw the open suitcase on the floor. OMG, my neighbor was back! Scratch was probably cuddled up in bed with her. Hoping I hadn't awakened her after her very long flight home, I stealthily crept back down the hall, feeling for all the world like a thief. I haven't seen her yet today to apologize for barging in. I can just hear Skippy saying to Scratch, "Parking at the airport-$56.00, trip to Paris, $2,500, look on neighbor's face when she found out mom was home-priceless!"
Posted by Kim Wolterman at 8:32 PM 2 comments:

When I was young I swore I would never dye my hair. Who cares if your hair is gray, I thought. Why hassle with dying your hair just to please other people? That all changed as I began to get gray hair. At that point I realized that I did not want my hair to make me look older than I am - or even my age, for that matter. So I have been coloring my hair myself for quite a while now. I'm at the stage where I combine two colors together to get the "look" I'm going for. I picked up the two boxes of color last week at Walgreen's, intending to get the job done this weekend. I washed my hair Saturday night and it was still a little damp when I went to bed. So it was lookin' good Sunday morning as I went outside to water the plants before it got too hot.

Back inside, I slipped into my hair coloring t-shirt, an old freebie t-shirt from a meeting I attended years ago, and opened the boxes of color to do the mixing. The first thing I noticed was that the one box was not correctly sealed. Uh-oh. As I looked inside, the gloves were loose and not folded within the paper directions, and the bottle containing the dye had streaks of brown trickling down the outside. Have of the mixing solution was gone. Some ignorant jerk had used half the product and taken it back, probably securing a refund as well. Grrrrr....... I quickly changed into a more respectable shirt, but could do nothing about the state of my hair considering it was about to be colored. I drove back to Walgreen's and stood in the one open checkout lane only to get to the cashier and be told I needed to see a manager. The box was exchanged, but no apology was offered to me for the inconvenience I incurred in making a return trip. Yes, I should have noticed the broken seal, but come on. Who was the idiot at the store who put the open, returned box back on the shelf?
Posted by Kim Wolterman at 10:57 AM 1 comment:

Don't Rain on My Parade

Saturday was the annual Webster Groves 4th of July parade. It doesn't get more Americana than Webster Groves with its July 4th activities. The carnival, complete with the Lion's barbecue, Miss Webster competition, fireworks and an old fashioned parade something for everyone. Adding to the excitement of this year's parade was the fact that the Anheuser-Busch...errrr, I mean InBev, Clydesdales were leading the parade. In the past such an honor has been bestowed upon the much larger downtown parade. The parade begins at the local high school at 10:00 a.m. As usual, the weather people were wrong in their prediction for Saturday morning. A "chance of rain" turned into a a steady downpour for most of the morning. Was the parade on or off? Thinking that City Hall may have jumped into the 2000s and posted an update on their website, I logged on to take a look. No such luck. Come on City Hall - get with the tweeting! What I did find online, however, was a friend with a posting on Facebook about the parade. A rain delay until 11:00. How did she know this, I asked? Her son is in the band, so she kept us up to date. God I love the internet!

The others who were to attend the parade with us bailed due to the rain, so Jim, Kirby the cockapoo and I grabbed our lawnchairs and some water and walked the two blocks to our favorite seating area. I was surprised at how many people were already gathered for the parade. I don't know if they heard an announcement elsewhere, because they couldn't all have kids in the band! The parade was really good, as usual, but having the Clydesdales was a great treat. Kirby wasn't so sure about them, but with his black and white coloring he could have ridden up on the wagon with the dalmation. The horses were followed by three tractor trailers, making their way precariously through the tree-lined streets. Speaking of horses, the mounted girl scout troop apparently was concerned about bringing their horses due to the earlier rain, so they "rode" stick ponies. Funny! There were fewer politicians this year, which was a blessing even if it did make the parade shorter.

A cooler, overcast day made for a pleasant parade for all. "Nobody, no, nobody, is gonna rain on my parade."
Posted by Kim Wolterman at 11:50 AM 1 comment: