Friday our house was used as the set for the filming of an episode of a horror series by Morbid Curiosity. Entitled "The House on Plant", the first part takes place in 1922 and involves a love story, betrayal, murder and ghosts. A couple of 1920's era cars were parked in front of our house to add credence to the timetable, and they were very cool to see. It got even better when the owner asked me if I wanted to go for a ride. You bet I did! The pedals and gear shifts all seemed very confusing to me, but I'm sure they were very advanced at the time the Ford was built. I'm glad I had the opportunity to tool around the neighborhood in it, and I even more appreciate the conveniences and comfort of modern day vehicles.
One of the actors is a certified drone operator, so he had brought his drone along to do some sweeping aerial views of the house and yard. I have never been that close to someone filming with a drone, so I found that part interesting and am eager to see what footage will end up in the final cut.
There was quite a bit of film shot in front of the house with the cars, as well as on the front porch. I'm not sure what was going on, but our street looked like a parade route with cars traveling up and down it. Normally it is pretty quiet, but for some reason it seemed like Maple was being used as a way to avoid Friday rush hour on Elm. At times some of the crew just had to stop traffic so the shot could be taken without car noise in the background.

At dusk, the action was moved inside the house. There were shots in the entry foyer and the back stairway to the kitchen. Finally it was time for the bedroom action. And that is where three people were killed - in our bedroom. They wrapped things up with the ghost scenes. Four and a half hours later, everyone was gone from the house.
The second part of this episode is set in modern times, and that will be filmed in our backyard. They need to perfect some of the stunts that will be used, so it will probably be later in August before that takes place. Because many people will die, I will be sending out a note to my neighbors to let them know what is going on so no one calls the police. The director will let the police know of the filming as well, in case anyone freaks out. Should be fun!
Posted by Kim Wolterman at 12:34 PM No comments:

In the spring I put out the hummingbird feeder that I purchased last year, eagerly awaiting the arrival of the tiny birds. Weeks went by without a sighting. Friends of mine had been commenting on Facebook that they had yet to see anything at their feeders either, despite following the instructions on how often to change the sugar water solution. I wondered what was going on weather-wise that the birds were not making their way to St. Louis. Finally on July 17th I saw my first one. Now there are several who come to feed, including a much smaller juvenile.

Last Sunday I went to the Missouri Botanical Garden with someone from my Women in Focus group. It was a beautiful morning in St. Louis with a cooler temperature and low humidity. There was a nice breeze as well, which isn't necessarily a photographer's friend. We had a good time while she worked with me on going 100% manual with my camera settings to try and capture a water droplet. I can't say I was totally successful, but I learned some things about my camera so that was worthwhile. All the water lilies were in bloom, and I am a huge fan of those. We wanted to play around with our lens balls a bit, and that certainly resulted in a lot of strangers coming up to us to see what we were doing!

After grabbing lunch we drove over to Horseshoe Lake in Madison County, Illinois. I had never been there before, though I had seen a lot of photos on Facebook that were taken there. It is a nice lake, and many people were there fishing, having picnics or just taking walks along the lake. We even saw a woman walking her dog with a bow and arrow on her back! When we stopped to talk to her, she explains that she fishes with a bow and arrow. The arrow is attached to fishing line, and she reels it back in after each use. I never knew such a thing existed.

Friday there will be a camera crew at my house filming a show. Morbid Curiosity is a "made for TV series of short Horror/Drama stories" which air locally through Charter Communications. For this particular story they were looking for a Victorian home, and ours fit the bill. The first part of the show  is set in the 1920s, and that is the portion that will be filmed Friday. The second part is present day, and will be filmed in our back yard at a later date. There will be murders, ghosts and mass casualties! It will be very interesting to see the making of a show. And to watch my neighbors' expressions when a "For Sale" sign goes up in my front yard, albeit on a temporary basis. Hopefully all the ghosts will leave when the filming crew does. Stay tuned...

Posted by Kim Wolterman at 3:22 PM No comments:

As we have rolled into July, I've been able to get out a bit and do my favorite pastime - taking photographs. Jim and I, along with another photographer friend, have gone out several times together in the last year or so to take pictures. Then after a couple of days, we share our favorite photo from the outing with each other. It is always fun to see our different perspectives, even though we were in the same area together. This month we went to the Columbia Bottom Conservation Area in north St. Louis County.

Located at the confluence of the Missouri and Mississippi Rivers, Columbia Bottom has over 4,000 acres of land to explore by car, bikes or walking. They also have an area to put in boats, and I have seen people coming there to fish as well. The conservation department has planted fields of sunflowers, so that was the draw for us on this trip. Four fields were in bloom, and they have staggered the plantings so that there should be flowers in bloom through August. Though I wish we had arrived earlier than 9:00 as it was already hot and humid, the sunflowers were amazing.

We also attended the Webster Groves 4th of July parade, which is a time-honored tradition for us. We simply have to pack up our chairs and water bottles and walk over two streets to the parade route. After years of practice, we know where to set up our chairs so that we will be in the shade the entire time. Jim set our chairs up early, and we walked over around 9:15. The parade starts at 10:00 and it takes a good half hour to reach our spot. But the time passes quickly talking to the folks around us and people watching. Despite all the political entries in the parade, I thought it was a good one and that people were very respectful.

On Friday, July 6th we had a nice treat. An architectural firm that Jim works with, Fox Architects, was celebrating their 40th anniversary with a party at their office. It happens to be located directly across the street from the St. Louis Arch, the grounds of which have been newly renovated. For the first time in several years they were able to have Fair St. Louis back on the arch grounds now that construction is complete. We had a bird's eye view from the 18th floor of the One Memorial Drive building, high above the crowds and an exceptional spot to watch the fireworks display. It was a great time!


Posted by Kim Wolterman at 4:30 PM No comments: 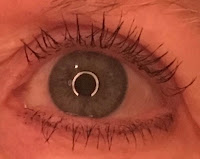 The gal from the office called today, and my insurance company says I have to wait three months following the cataract surgery before they will approve this procedure. And obviously they know so much more about it than one of the top ophthalmologists in the United States. (Insert sarcasm here.) I am scheduled for September 5th. While I don't like having to look through the smudge for another two months, I am eager to see how things will look out of these new eyes once it is all said and done.
Posted by Kim Wolterman at 5:15 PM No comments: