Well, it's the last day of 2017. We had a wonderful Christmas, with St. Louis even managing to add a smattering of the fluffy stuff to give us a white Christmas. We picked Katie up at the airport around midnight on the 22nd, and Andy and Megan drove in just before lunch on the 23rd. We were able to do most of the Christmas traditions while they were all here, drinking our signature Santa Clausmos while opening gifts on Christmas Eve, making sure they got their Imos fix, playing games and putting together a puzzle, and checking out Candy Cane Lane in south city followed by a visit to Ted Drewes. We even fit in a trip to the library so the kids could check out my first solo photography show.

A first for us was heading to a 9:00 a.m. movie on Christmas Day, catching the new Star Wars movie. None of us had been to Ronnie's theater since their remodeling, so it was a treat to sit in the heated, reclining chairs. Attendance was light, making for an enjoyable viewing experience. We all thought they did a good job with the latest movie.

Andy and Megan headed back to her parent's house in Indiana Wednesday afternoon. They are driving back to D.C. today. Katie is here with us until an early flight takes her home to L.A. Tuesday morning. We know that we are blessed that all of them can make the trip to St. Louis to visit us each Christmas season.

As 2017 comes to a close, I can honestly say it was one of the best years ever for me personally. Next year will have to do a lot to top the fun and excitement of this year. Let's see what happens.

Posted by Kim Wolterman at 2:22 PM No comments:

Bird is the Word

Last weekend I picked up one of my friends at 6:20 in the morning, and we drove to the Audubon Center at Riverlands in northeast St. Louis County. We wanted to arrive in time to see the sun coming up over the various bodies of water at the center.

The Audubon Center is located on 3,700 acres of restored prairie marsh and forest, and serves as a migratory bird sanctuary. Over 325 species of songbirds and waterfowl live in or migrate through the area. This time of year the main draw is the arrival of the once endangered trumpeter swans. In late November a record 1,089 swans had been recorded. They will hang around the area until around February or March.

We did get there in time to see the sunrise, but I'm not sure where in the heck the 1,089 swans were hanging out. I would say that we saw several hundred on Heron Pond, which was pretty cool. They are such large birds, with a height of 4 feet and a wingspan of 7 feet. And they are certainly noisy, earning their name of "trumpeters".
After we finished with the birds, we decided to play around with our crystal balls. I'm so glad I thought to bring mine along as it was really fun to see what I could come up with when shooting through the ball.
We ended the morning by catching breakfast at a local place called the Florissant City Diner. The food was plentiful and tasty, and the prices were unbelievable. I need to go back there with Jim some morning. What a fun day!
Posted by Kim Wolterman at 1:42 PM No comments: 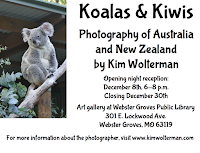 Earlier this year the Webster Groves Public Library invited me to have a solo photography show in their art gallery during the month of December. I have participated in a half dozen shows over the past couple of years, but have never done one on my own. The thing is, with a solo show your work has to carry the load of the entire exhibit. Your piece is not one of many, but rather many pieces of you. But I felt like my work from Australia and New Zealand could stand on its own, so I agreed to exhibit.

As I had come home from my trip with slightly over 3,500 photos, it was rather daunting to narrow it down to the best. Normal shows at the library contain 20-25 pieces, but I chose to show the 34 pictures that I felt best represented the two countries I had visited. Next I had to determine what size to make the prints. They needed to be large enough to show the details, but not so large that it would limit how many photos I could hang. Originally I wanted all of them to be the same size, mounted only behind an 11"x14" glass frame with no mat or wood to detract from the pictures. However, nine of the photos would not fit in that format without cutting off pertinent items such as a kangaroo's tail, for example. So in the end, I had those nine printed 10"x20" and mounted on gatorboard. It wasn't exactly what I had envisioned, but it worked. After I received all the prints back from the lab, I applied wire to the back of each per the library's hanging system requirement.

Jim was a godsend in helping me with my final photo selections, and providing input on the best way to display the pictures. He spent several hours with me on December 2nd hanging the show, and came up with an inventive method to level the photos when the hanging system at the library kept tilting all the images downward. I went back to the library on the 3rd to clean off any fingerprints and apply the photo labels to the wall. The show was ready to go!

Wednesday I got my hair cut, and my long time stylist, Charles, offered to have me come back on Friday so that he could style my hair for the reception at no charge. I took him up on his offer, and he would not even accept a tip from me. 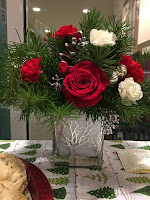 The opening reception was held Friday night from 6-8. Jim and I got to the library at 5:30 to set up the tables. A surprise was awaiting, as the librarians said flowers had been delivered for me. Jim had handed me fresh flowers when he got home from work, so I knew they hadn't come from him. As it turned out, our Minnesota friends Kathy and Paul, who had joined us in New Zealand, sent a floral arrangement for the opening. How nice is that?

On one of the tables we put the wine, water, 7-Up, lemonade, ice and glasses. A second was for the cheese and sausage tray, along with a vegetable tray, crackers, grapes and a candy dish. The third was reserved for the amazing chocolate chip and cranberry white chip cookies that I had ordered from a friend. They were a huge hit, as I knew they would be!
Through the course of the evening around 35 people came through the exhibit, including stylist Charles and three of his friends. A few were folks that I didn't know but who had read about it on the library's Facebook page or in the calendar section of the Webster-Kirkwood Times. Several neighbors, many friends and a few of my Women in Focus photography group stopped by. I was touched by how many of my pickleball ladies came as well. I was not able to take many pictures, so thanks go out to my friend Caren Libby for those below.
Everyone complimented me on the quality of the photos as well as the way I had chosen to display them. And I even sold one that night! In the end, I'm glad I faced my insecurities and put my work out there. Sometimes you just have to get out of your own head.
Posted by Kim Wolterman at 1:21 PM No comments:

This year we traveled to Iowa to spend Thanksgiving with my in-laws. Normally we celebrate at home or in the D.C. area with the kids. For several reasons we decided to head north this year. The weather cooperated, with sunny, dry roads on the way up and back, and moderate temperatures. We had a wonderful time with great food, even better conversation and some rousing games of Five Crowns. And we were lucky enough to be able to participate in the annual Wolterman Christmas cookie decorating extravaganza. We missed seeing the kids, but fortunately they will be home for Christmas in a few weeks.
Saturday Jim and I spent several hours setting up my photo exhibit at the Webster Groves Public Library. It is my first solo photography exhibit, and I titled it Koalas and Kiwis as all 34 photos are from our trip to Australia and New Zealand. Deciding with pictures to use was a challenge as I had over 3,000 to choose from! But I think I came up with a fair representation of what we saw. Friday is the opening reception at the library from 6-8 p.m., so I am planning what I want to serve at that. What I know for sure is that it will include wine as well as some of my friend's excellent chocolate chip cookies. The photos will remain up until December 30th.
On Sunday I once again photographed Santas on the Loose, a fun 5K run in Webster Groves sponsored by the Webster-Shrewsbury-Rock Hill Chamber of Commerce. The money raised goes to support the Crisis Nursery in St. Louis. The weather was outstanding, so the two hours I was there flew by.
The weekend wrapped up last night with a Christmas program at my niece's church in south St. Louis county. There was singing, dancing, and more musical instruments than I could count. What an immense amount of talent that church has in its membership! It was good to catch up with my niece, her husband, and her mother-in-law before the season gets too crazy.

Posted by Kim Wolterman at 5:18 PM No comments: