Yesterday was Memorial Day, and it always fascinates me how many Americans do not understand the significance of the day. Known as the unofficial start of summer, it is typically celebrated with barbecues and family gatherings. In some families it has been called Decoration Day, as that is when they went to decorate the graves of deceased relatives.

In fact, it is a day set aside to honor the men and women who died while serving in the United States military. It is not to be confused with Veteran's Day, which honors all those who served in the military.

Our community held its second annual Memorial Day golf cart parade yesterday. As you can imagine, the golf carts are all decked out in patriotic themes. Last year the parade was led by a group of bicyclists, but since then Phases 2 and 3 of the community have been built out. It is very hilly, and this year's route was nearly 6 miles long. The Lifestyle Director decided to invite the e-bike riders to lead the parade this year. Seven of us signed up, and most of us put at least a little decoration on our bikes. I believe there were 14 golf carts who participated in the decoration contest, plus 4 more that were on loan from Carolina Carts, one of our community sponsors.

Before the parade, we gave thanks to those who have kept our country free through their bravery. As we rode through the community, with patriotic music sounding from the golf courts, neighbors waited on their front lawns to wave and cheer us on. I'm proud to be an American, and happy to call Imagery home.

Posted by Kim Wolterman at 9:43 AM No comments:

One Million Dead, and Counting

The U.S. has now recorded over a million deaths due to Covid. Many experts feel that is an undercount due to lack of tests/testing and reporting. At the beginning of Covid the press speculated that perhaps 200,000 Americans would die from Covid. We were appalled, and thought that couldn't possibly happen. Yet now look at the number! And where is the outrage? Are we just so numb to the numbers due to the amount of time we have been battling this virus? While it may be true that Covid will never really go away, similar to the flu, I hope it can be controlled to the point that we aren't looking at this number of deaths in the future. Too many people have not lived to see another sunrise.

Posted by Kim Wolterman at 2:07 PM No comments:

It's been awhile since I have written a post exclusively about Covid-19. But nearly 1 million Americans have now died from Covid. A million!!! Never did anyone imagine that we would lose so many people in our country due to this virus. And we are far from being out of the woods.

Unfortunately, signs everywhere are pointing towards an uptick in Covid cases. This is predominantly due to the mutation of this virus. The current variant, Omicron (BA.1), now has a subvariant called BA.2. Each new variant seems to be more transmissible than the previous one. The good news is that the new one does not seem to cause more severe disease in patients than the previous one. However having vaccines and boosters does not seem to prevent one from getting Omicron, though symptoms, hospitalizations and deaths seem to be less in those who are vaccinated.

Current thinking by the experts is that the coronavirus will never go away. It will continue to mutate, and will be somewhat controlled by vaccinations. Most people have gone back to their pre-covid routines, filling stadiums, concert halls, churches, etc. It is rare to now see anyone with a mask on. Though we have had our vaccines and the two boosters, we still wear a mask in places we feel we are susceptible to exposure. We are not going to large venues, or traveling outside the country yet. It's not perfect, but we also need to live our lives as safely as we can.

Will I still be writing about covid at the end of 2022? I would like to think that I won't, but we are a long way from this being over. The supply chain in our country is still a mess, businesses cannot find people who want to work, inflation, fuel prices and interest rates are up. The airlines are a mess with staffing shortages and higher fuel prices, so even country-wide travel may be off the table for us. At least those involving planes. We tried to book tickets to Denver from Charlotte for June, and the cost (even with flexible dates) was nearly $1,900 per round trip ticket! It's just crazy. Fortunately there is nowhere we have to be, so we will plan more regional trips where we can drive the new car. And staying here and enjoying Mother Nature is no hardship. Below was yesterday's sunrise. We are blessed beyond measure.

Posted by Kim Wolterman at 3:53 PM No comments:

The PPA Comes Our Way

Last week the PPA North Carolina Open was held at LifeTime Charlotte. PPA stands for the Professional Pickleball Association, so that meant that many of the leading pros in the sport would be coming to Charlotte. Jim and I decided to volunteer on Sunday, since it was Mother's Day and we figured they would have a hard time fining volunteers on that day. We also offered to host one or two pros at our house.

Because we have two extra bedrooms and bathrooms, Collin Johns and Patrick Smith took us up on our offer. Both are in the top ten of male pickleball players in the world, and had partnered up for men's doubles in this tournament. They also each played in mixed doubles.

As volunteers we could come on any or all of the days to watch play. Our guys had no games on Thursday, so Jim made them a nice breakfast while I went to my women's league play. Then they practiced on our courts here before heading to the venue to get some practice in on the indoor courts. Friday they played mixed doubles, and we went on a wine bus tour with our neighborhood. This event had been rescheduled from May of last year due to Covid.

Saturday the guys had their men's doubles games, so we spent the day at LifeTime watching. Someone ended up giving us wrist bands to sit in the VIP section, which was a slightly elevated seating area above the championship court. It was amazing to watch the pros play.

Our guys did not advance to the finals on Sunday, but we still had to work so we left them slumbering at 7:00 in the morning. As luck would have it, Jim got assigned to the championship court to check that guests had the correct wrist bands on, and I was assigned to the VIP section. Both of us had great opportunities to watch the gold medal matches of singles, men's, mixed doubles and women's play. It is totally different to watch the games live as opposed to on television or a computer. And to get caught up in the enthusiasm of the crowd was so fun! I definitely would volunteer to help out again, and Collin and Patrick are more than welcome to stay with us in the future. They were a delight to host. I learned a lot from picking their brains, and watching them play. Paddles up!

Posted by Kim Wolterman at 3:53 PM No comments:

With our new wheels we decided to head to Mount Olive, North Carolina for the Pickle Festival. Mt. Olive pickles happen to be my favorites, so what could be better than a pickle festival in the town where they are made? After a two year hiatus due to Covid-19, the festival was able to resume it's 35 year history.

We arrived on the 22nd so we could have some time to visit the town of Mount Olive before all the crowds arriving the next day. I'm glad we did as we were able to view the downtown area and the murals unobstructed. That would not have been possible the next day.

After spending the night in nearby Goldsboro, we drove back to Mount Olive early in the morning as we knew parking was going to be a challenge. We had to park at the University of Mount Olive, where they were providing shuttle buses to take festival-goers to and from the downtown area. That actually worked out pretty well.
The festival consisted of pickle packing and eating contests, a small carnival, a tractor show as well as a car show, and free pickle samples. Rows upon rows of vendors tempted attendees with all kinds of food, beverages, art, and trinkets. By the time noon arrived, it was incredibly packed in the area. (I read later that it was the largest attendance in the history of the festival!) We lasted until around 1:00, and then took a bus back to our car. 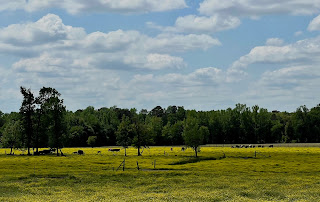 From Mount Olive we drove to New Bern, North Carolina for a few days. To the left is a beautiful field we passed along the way. I had said once we retired that my motto is "Make the U-turn". When I passed this scene, I made a u-turn so we could go back and photograph it. It was worth it!
We had heard a lot about the colorful little town of New Bern, which was settled by Swiss immigrants in 1710. They named the town after the capital of Switzerland. New Bern is the second-oldest European-Colonial town in North Carolina, and was once the state's capital. It is also the birthplace of Pepsi Cola. Invented in 1893 by Caleb Brandham at his drug store in town, it was originally called Brad's Drink. He renamed it Pepsi-Cola in 1898. In 1902, the Pepsi-Cola Company was formed with Brandham serving as the first president.
We stayed at a wonderful VRBO condo, which was located on a harbor along the Neuse River. It was perfect for us with a great water view (as seen below), indoor and outdoor pools, and tennis courts which were striped for pickleball. The little duck family outside our unit were an added bonus, as was the ability to catch the sunsets from the dock.

We very much enjoyed New Bern. It's very historical and well-maintained. The downtown streets contained a lot of unique shops and restaurants, and the old churches and cemeteries were interesting to explore. If you are so inclined, you can seek out the more than 50 fiberglass bears which were installed in 2010 for the town's 300th birthday. Hand-painted by local artists, they are scattered throughout the area. It reminded me a lot of the painted cakes put out in St. Louis as a celebration for the city's 250th birthday. These types of installations are a great way to not only get people excited about learning the history of the area, but also encouraging them to visit sites they might not otherwise think to go and see. We did not go bear hunting, but did photograph the ones we came across.
Pickles and bears - a winning combination!

Posted by Kim Wolterman at 5:46 PM No comments: