Mammas, Don't Let Your Babies Grow Up to Have Skin Cancer

When I was little, we played outside all day. Like many kids, we only had to be home when the street lights came on as the sun set. There was no such thing as sunblock and no one wore hats, so sunburns were a likely, if unwelcome, consequence of playing foursquare, hopscotch, and jump rope under the hot summer rays. I remember one summer when my arms burned so badly that my mom took me to the doctor. My second and third degree burns were coated in ointment and wrapped in plastic wrap. Can you imagine? The heat was trapped inside the plastic, and my skin continued to cook. That was the way burns were treated back then.

When I was a teenager I wanted to look cool like the other girls, so I spent my fair share of time baking in the sun in pursuit of the illusive tan. How silly was that for someone with blue eyes, pale skin, and Irish heritage? Burn, peel, repeat... I never got tan, so you would think I would have learned my lesson.

While I'd had a couple of suspicious moles removed in the mid-80s, it wasn't until 1992 that I received a diagnosis of skin cancer. CANCER - a word that strikes fear into the hearts of anyone who hears it uttered by their physician. I was 37 years old, and the first in my family to get skin cancer. The basal cell on my forehead was surgically removed in August of that year, with a second one (also located on my forehead) removed three months later. That was just the beginning, and through the years I have had six basal cell and two squamous cell carcinomas removed. All but one of those were located somewhere on my face.

Basal cell carcinomas are the most frequently occurring form of all skin cancers. More than one in three new cancers is a skin cancer, most frequently basal cell. About two million new cases are diagnosed in the United States each year. The second most common form of skin cancer is squamous cell, with about 700,000 cases reported each year. Then there is melanoma, the deadliest form of skin cancer. Around 74,000 new cases are reported each year, along with 10,000 melanoma deaths.

Every six months I see the dermatologist, and without exception there are always pre-cancerous spots that he treats with liquid nitrogen. This week there were a total of twenty locations that he burned. While it is not a pleasant experience, it beats the heck out of going to the surgeon to have them excised. Unfortunately, two spots on my forehead have not responded well to this treatment. It did not come as a surprise to me that the dermatologist referred me to a plastic surgeon for removal. I have seen enough of these to know that these are skin cancer. The only surprise is that I have managed to go ten years without having any growths removed.

The earliest the plastic surgeon can see me is the beginning of March, so I am scheduled for the surgery on March 7th. I wanted to get through Jim's big birthday weekend before having it done. I know that I have been phenomenally blessed that so far my skin cancers have only been basal cell or squamous cell. I am pleased that the same surgeon who removed the last three is still practicing. He does such a nice job, and people do not notice my scars unless I point them out. Here are the two bumps he will be removing.

So while it won't be fun, I hope and pray that these are the more minor forms of skin cancer. And that this is the only type of cancer that I ever have to deal with in my life.

To the parents and other child care providers out there, don't skip the sunblock on your wee ones. I know it takes time to put on and that they really just want to get outside to play or jump in the pool, but it is worth it if in the long run you can prevent them from having to go through what I and many other Americans suffer through with our sun-damaged skin. Don't let your babies grow up to be like me!
Posted by Kim Wolterman at 4:06 PM 2 comments:

Around this time of year in the St. Louis area there are a couple of birding events that take place, and Jim and I try to get out and take some photographs if our schedules permit. First of all, it is trumpeter season at the Audubon Center at Riverlands in West, Alton. Hundreds of Trumpeter Swans overwinter in the great rivers confluence area. Trumpeter Swans are the largest native waterfowl in North America, reaching lengths of up to 6 feet. Their wing span is around 10 feet! It is believed that this group of swans comes from upper Wisconsin, and they typically spend December through early February here. At this time last year, 960 swans were counted in the Riverlands. Sunday I would say there were only a couple hundred. It is quite something to hear their honking, thanks to long, coiled windpipes. Unfortunately, none of them took off while we were there. That must be something to see as they need about 100 feet of runway space to get airborne.
The second thing we like to do is look for eagles. When the rivers north of Missouri freeze, the eagles come south looking for food in open waters. According to the U.S. Army Corp of Engineers, around 2,500 eagles winter along the lock and dams of the Mississippi River. The bluffs along the River Road in Illinois also provide a native habitat for these majestic birds. We took the road along the bluffs as far north as Pere Marquette State Park. Fortunately, you don't have to peer too closely for the birds. You can simply pull your car over to the side of the road where others are parked, especially when you see someone with a long, telephoto lens or a pair of binoculars. There are always other eagle scouts out this time of year.
While the day was pretty nippy, arriving early in the morning assured us of catching sight of the birds while they were out to feed. There is just something about seeing the national symbol of the United States in person that warms the heart, if not the body.

So, I Didn't Win the Lottery

For the past two weeks I have done something that I've never done before in my life - I purchased a couple of lottery tickets. The siren's call of first $800 million and then $1.4 billion was just too hard to resist. I had no thoughts of winning, which is a good thing since I didn't match any of the numbers. But it was fun to get a little caught up in Lotto Fever for a minute. I got a big kick out of this picture that was floating around Facebook, especially the part about looking in the mirror. 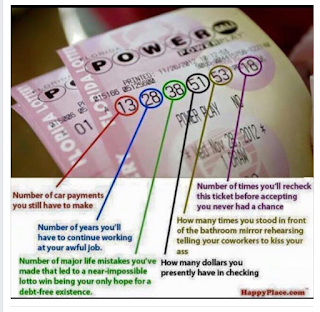 It was hard to be unhappy today, despite not becoming an overnight billionaire. The temperature was in the mid-sixties, so I knew I needed to get out of the house. I headed to my favorite place in St. Louis, the Missouri Botanical Garden. I got a new camera for Christmas, so I wanted to take advantage of the weather and put it through its paces. (At least the ones I could figure out without trying to read a 300 page PDF of the manual on my phone.) It was a good exercise, because I could see which features I need to read up on. But overall, I am pleased with the camera and think it will be a lot of fun.

Posted by Kim Wolterman at 6:29 PM No comments:

A Not So Happy New Year

For many in the St. Louis area, 2015 went out on a wet note. A very wet note, as more than eight inches of rain fell over a three day period. Nearby rivers overflowed their banks, and three interstates along with numerous highways were closed because they were covered by water. Homes and businesses were flooded, and people struggled to make their way to work without the benefit of their usual roadways. My neighborhood was not directly impacted by the flooding, although several people did lose huge trees due to the ground being saturated. (As we lost two historic trees of our own earlier in the year, I am very grateful that our remaining trees are still in place.)

On New Year's Day, Jim and I drove around the area looking at the flood damage. Somehow when you watch the news coverage on television, it doesn't seem to be real. Seeing the water up close certainly puts things in perspective.

We ended our tour by having a late lunch at Sugarfire Smoke House, which is located right by the flooded intersection of Interstate 44 and Highway 141. While the interstate had reopened by this time, 141 remained closed. We had never eaten here before, but they seemed to be doing a brisk business from the gawkers who had, like us, come out to survey the damage. I love that the restaurant had a sandwich special called the Sandbag. When life hands you lemons...

Best of all, I salute them for offering the special at no charge to anyone who was displaced by the flood. We will be back, Sugarfire - due to your excellent food as well as your community generosity.