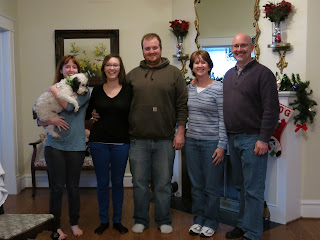 Andy and Megan arrived a little earlier than planned on the 26th because of the weather forecast. They got out of Huntingburg with no problem, but the interstate through southern Illinois was a bear. At times they were traveling only 10 miles per hour. They were relieved to get here and find no snow on the ground. Katie's plane was supposed to land at 10:30 p.m. but in fact did not arrive until 12:30 a.m. Andy volunteered to go get her, so the rest of us snuggled up here until they got back to the house. Then we stayed up talking until 2:00 a.m. It reminded me of the good old days when Jim and I would come home from work, load up the car and head up to Iowa, often arriving at our parent's house in the wee hours of the morning. It looks like I have something new to apologize for - staying up like that is hard on older folks. Yet our parents never complained. 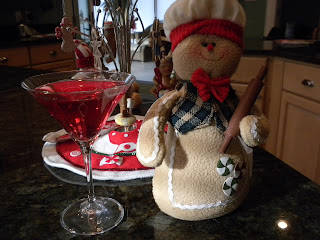 Jim and I worked out the next morning, and then he had to run into work as a young man was coming in for a job interview. I hit the grocery store as the cupboards were pretty bare. The kids went to the Galleria to finish up some shopping since we were opening gifts that night. I made a roast in the crockpot to simplify clean-up, and then we mixed up a batch of cosmopolitans for everyone to enjoy as we exchanged gifts. Yum! 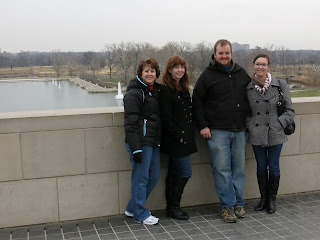 Friday we all went to the Art Museum since it had been pointed out that Megan had never been there. We were hoping to see the current exhibit of Barocci paintings, but it was sold out until late in the afternoon. Megan and Andy needed to drive back to Indiana and as more snow was predicted they wanted to get on the road before it got too late. So we walked through the museum instead, and hit Ted Drew's on our way back to the house.

Katie is still with us until Wednesday, so it is nice to have a little time to catch up with her. She is busy trying to see all of her friends before she takes off as well. After she leaves, it will be time for me to take down all the decorations. Then Christmas 2012 will be a wrap.
Posted by Kim Wolterman at 8:22 PM 1 comment:

A Strange Yet Still Merry Christmas

On Saturday Jim and I drove up to my in-law's house in northeastern Iowa to celebrate Christmas this year. It was the first time in 27 years that we did not have either one of our children with us for the actual holiday. Just like we have done in our 34 years of marriage, Andy and Megan alternate which set of parents gets them for Christmas. They drove to Indiana this year. And since Katie is in Los Angeles with a newer job, she has no paid vacation time not to mention the fact that it would have taken her three flights to get to the closest airport in Iowa. She is flying to St. Louis tonight, and Andy and Megan are driving here from Indiana to spend a couple of nights with us before heading back to Indiana. So we will celebrate our Christmas a little bit late, but we know we are lucky that we can make this happen at all.

In addition to our kids being missing from the activities in Iowa this year, Jim's younger sister was unable to drive up from Kansas City due to work commitments, and his older sister (who lives in the same town as his folks) was so sick that she ended up going to the hospital to get some antibiotics. We did not get to see her and her family until dinner time on Christmas Eve. Though there were several inches of snow on the ground, all of those things added up to it not feeling too much like Christmas. We even went to Christmas Eve Mass at 4:00 in the afternoon, and that was different as well.

Despite all that we had a wonderful visit and of course ate way too much. Jim's mom is such a great cook, and I have little will power when her wonderful cinnamon buns and brownies are placed in front of me. We were able to begin videotaping Jim's mom as she reminisced about her early life, and that was something we all had been wanting to do. We have much more to cover, and we would like to get my father-in-law recorded as well. All in all, a great start to the holiday season and we are eager to see the kids tonight to continue the celebration.
Posted by Kim Wolterman at 5:26 PM 1 comment:

We pass them everyday but never know what is behind the mask until it shatters.
Posted by Kim Wolterman at 2:29 PM 1 comment:

Reflection on the Newtown Tragedy


As the angels weep so do we,
for such events we never could foresee.
Prayers for Newtown and the entire U.S.
as we struggle to make sense of the senseless.
Posted by Kim Wolterman at 8:01 PM 1 comment:

Last weekend was a big one for libraries in the St. Louis area. In addition to the reopening of the newly remodeled Webster Groves Public Library which was discussed in my last post, the main branch of the St. Louis Public Library held a ribbon cutting ceremony on Sunday. Following two years of construction the 1912 Carnegie library's $70 million renovation was revealed to the public.

I had been in the library a couple of times in the past to do some house history and land research, and had admired the beauty of the architecture. But this renovation has really transformed the place, opening up some original detailing that had long ago been covered up. An additional 50,000 square feet has been made available as public space, including a large auditorium. With all of the people at the event, it was hard to take everything in. I only had my point and shoot camera with me as I anticipated that they would not allow cameras. I definitely will go back with my DSLR camera and get some more photos. And I am eager to explore the history and genealogy section of the library as well.


How blessed I am to live in an area that treasures not only public libraries but also the historic buildings that contain their holdings.
Posted by Kim Wolterman at 3:17 PM No comments:

Several years ago the citizens in my community voted for a tax levy to fund an addition to our local library. Though we have had a library of some sort in Webster Groves since 1890, the existing building was constructed in 1951. Over the years the auditorium was re-purposed as the area for children leaving no space for author visits, educational seminars or community meetings. Existing technology was also a little behind the times. Construction began on the remodeling and addition over a year ago, and the library reopened to the public last Monday. I ran in to take some photographs (and check out a few books), and I am just amazed at the transformation. I am usually a little cool towards uber modern additions on old buildings, but the new space is open, airy and spacious. I can't even imagine how happy the staff must be in their new surroundings. Here are some of the photos I took.

The official ribbon cutting and open house was on Saturday morning, so Jim and I went to it so that he could see the changes. It is always interesting to go to something like that with him as he has a different perspective on buildings than I do since he has a design degree. He agreed that it was a remarkable improvement. Now I am eager to go back and take a closer look at the reference room and materials. I think there may be some things I can find on my Shrewsbury research there, and I am always looking for house research resources that I can add to my Webster Groves House Research Facebook page.

My friend and I went on the Webster Holiday House Tour today. It is the major fundraiser of the middle school here and is always a wonderful event. I actually co-chaired the tour the two years that Katie was at the school. What a huge job! I have a lot of respect for the (mostly) ladies who organize house tours. There are always at least six houses on the tour, and they have a boutique with refreshments at a different location during the tour hours. At each of the houses 7th and 8th grade students play musical instruments.

The weather, of course, was perfect today. I was expecting it to be way more crowded than it actually ended up to be. We were able to walk to a number of the houses, and it was great to be in a short sleeved shirt. Two of the houses even had their air conditioners on! Who could have imagined 70+ degree weather in December! We toured four houses before heading to Eden Seminary for some cookies and punch. Our timing was great and we got to hear the male and female a capella groups from the high school perform. That is always entertaining. Then we hit the last two houses and headed home.

Seeing all the pretty decorations made me feel like I am way behind schedule. I need to start dragging my Christmas stuff out of the basement and get cracking. Ho, ho, ho...
Posted by Kim Wolterman at 9:13 PM 1 comment: