One of my nephews died last Monday at the age of 47. While it is tragic enough to lose a person so young, the grief is compounded by the fact that he took his own life, leaving a suicide note behind. Because he grew up in a state far away from me, we were not as close as I would have liked. I cannot begin to fathom what drove him to give up hope, though I have since heard he was experiencing financial difficulties.

As a nation we need to do better at providing mental health options for people in need. Suicide is the 10th leading cause of death in the United States. Each year around 45,000 people commit suicide in our country, according to the American Foundation for Suicide Prevention. Sadly, my nephew will be part of the 2018 statistic.

September is National Suicide Prevention month. Let's all do our part to draw attention to the problem of suicide, let people know that suicide can be prevented, and advocate to do more to prevent people from feeling like suicide is their only option. It's too late for my nephew, but hopefully not too late to help others who are struggling.

Posted by Kim Wolterman at 4:52 PM No comments:

We celebrated our 40th anniversary last weekend. Even seeing those words in print does not make it any more believable to me. It doesn't seem possible that those two starry-eyed kids are now looking retirement in the face. It's been quite a ride, and I am so glad that I had Jim in the other seat as we have taken this journey.

When we got married we were fresh out of college. Jim had taken a job in St. Louis, and I stayed in Des Moines for the summer, living with my parents and getting everything ready for the wedding. We had little money and college debt to consider, so flying off to the Caribbean or Hawaii for a honeymoon was out of the question. I reserved a room for us at a nice hotel for our wedding night, but then we headed up to Appleton, Wisconsin to camp and do a float trip on the Apple River for several days. We had purchased a used tent from Iowa State University when they were selling off their old supplies. It was a heavy canvas that had an off-smell and didn't breath at all. Great in August, right? Not so much. But we were young and in love, and we did didn't mind it.

Fast-forward 40 years to when our anniversary falls on the same weekend as the SWT float trip, which was being held this year at Echo Bluff State Park. Camping and floating for your 40th anniversary is every girl's dream - or not. I looked everywhere for a hotel, B&B, AirBNB, VRBO for Jim's partner and his wife to stay in along with us last weekend. There was nothing available. I explained to Jim that there was no way I was camping out in August in southern Missouri. I told him to have nice time, because I wasn't going.

By divine intervention we were bumped to the top of the wait list for a cabin in Echo Bluff. Being part of the design team has its perks. We ended up with a 3 bedroom cabin that was amazing. It was definitely glamping at its finest. We spent Friday and Saturday nights there, and kayaked on the 9 mile river route Saturday. The weather was perfect other than a little rain Friday night. We were in a cabin, so we sure didn't care!


Heading back to St. Louis Sunday, we stopped at a hamburger joint in Steelville for lunch. The waitress overheard Jim's partner saying he would pick up the tab for our anniversary. She asked us how long we had been married, and I told her 40 years. I imagine she and the table of people across from us were thinking, "Wow, 40 years and her husband took her to get a hamburger in Steelville!" We all laughed about that in the car. And that laughter is what has gotten us through 40 years of whatever life has thrown at us. I'm eager to see what the future holds and to hopefully, like Robert Frost, take the road less traveled.
Posted by Kim Wolterman at 12:46 PM No comments:

"I say a little prayer for you...", Aretha. Rest in Peace, and sing with the angels.

Posted by Kim Wolterman at 4:05 PM No comments: 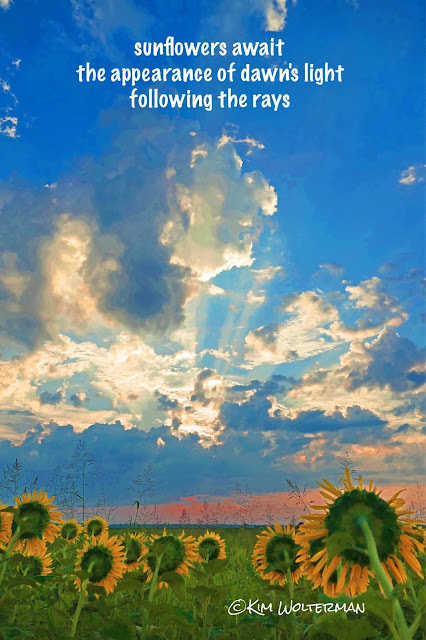 Posted by Kim Wolterman at 4:44 PM No comments: