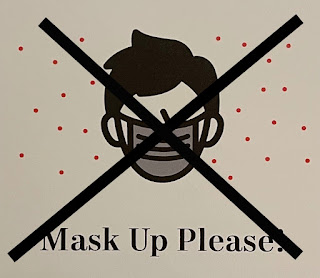 As anticipated. Mecklenburg County voted to lift its mask mandate effective February 26th despite the fact that none of the the criteria for unmasking has been met. The Covid positivity rate is still at 15%, nowhere near the 5% they said would be required to remove the mask mandate. My observation has been that Mecklenburg County businesses have already removed their "Masks Required" signs. Most people thought it went into effect last Saturday anyway.

Time will tell if this is a premature decision or not. The last time everyone removed their masks, Covid cases sky rocketed. As people return to venues with 60,000 plus attendees, all unmasked, what will happen? Everyone has to make their own decisions about what feels right to them. I'm still going to avoid large crowds, and wear my mask indoors. I'd still rather be safe than sorry for awhile yet. My booster shot was five months ago, and I have no idea what my immunity is at this point. Keeping a mask on seems an easy precaution to take at this point.

Posted by Kim Wolterman at 7:56 PM No comments:

Walk into any store, restaurant or building around here and you will be hard pressed to find anyone wearing a mask. Unless I happen to be there, because I STILL don't want to get covid. The greater Charlotte area is in Mecklenburg County, which has had a mask mandate in place since August 31, 2021 because Covid cases continued to rise. When that mask mandate was put into place, the ruling said that the Covid test positivity rate must reach 5% or less for four straight months before the mandate would be lifted. In November, 2021 the ruling was revised to state that the mandate would be lifted when a 5% or less positivity rate existed for seven days straight.

To date, we have not reached that benchmark. In January the positivity rate was around 32%. By last week it had dropped to 20.8%. The latest number from February 13th shows the rate at 15.7%. The numbers are definitely trending in the right direction, but how much of this is due to a decrease in Covid cases versus the fact that many people are utilizing home tests? The home test numbers are not often reported to officials.

Tomorrow the Mecklenburg Board of County Commissioners will vote on whether or not to keep the mask mandate in place. They are getting a lot of pressure from employers, schools and businesses to drop the mandate. The states of California and Oregon have already dropped their mask mandates. I suspect Mecklenburg will do the same.

Does anyone else see the irony of our federal government paying for and distributing 400 million N95 masks right before we are all told we don't need to wear one anymore?

Posted by Kim Wolterman at 4:50 PM No comments:

Bicycle Built for One

Our new neighborhood has many hills, which makes it great exercise while walking but a real bear when on a bicycle. I finally got to the point where I could ride my bike to the pickleball courts without having to get off and walk the bike. But going anywhere beyond that in the community was not happening. There is a bike club here, but I could never join in the fun because I wouldn't be able to keep up.

So for Christmas my husband got me an electric bike. There are probably a couple dozen people here who have one, so I was able to see different models and even ride a few. I listened closely to what they liked and didn't like about their bikes. We have a Trek store nearby, so we went there in December to see what they had. I really liked the look of the Townie 7D, which was redesigned for 2022. But they didn't have any that I could ride. They did, however, have a 2021 available. I took that one out for a spin, and rode a different style bike as well, and I really liked the Townie. It is pedal assist, so you must be pedaling to use the power.

We put a deposit down on a Tahiti Blue bike that was supposed to arrive in mid January. Like many other things during Covid, that didn't happen. They finally got the bike in last weekend and assembled it, and I was going to pick it up on Monday. But Monday was a rainy day, and I knew I would want to take it for a spin to make sure everything worked fine and didn't want to do that on wet pavement. Tuesday was sunny so we got to the store shortly after it opened.

By borrowing the neighbors bike rack we were able to take my old Trek in to be evaluated as a trade in. When the sales guy looked at the rack, he said there was no way we could put the Townie on that to get it home. It just wasn't substantial enough for a 45 pound bike. Fortunately the front tire on the new bike is a quick release, so we were easily able to get it in the back of our car.

I've taken the bike out three days in a row, and I absolutely love it! I mostly have the power off, just engaging it when I'm going up a hill. I can ride with Jim now, so I know we will motivate each other to get out and get fit. I'm also eager to join the bike club and meet some new people. Merry Christmas! 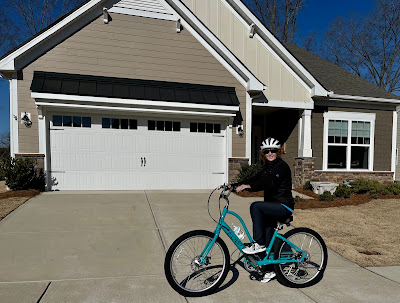 Posted by Kim Wolterman at 5:41 PM No comments:

February - What's Not to Love?

It's the first of February, and we are at the threshold of going into the third year of Covid-19. The omicron variant has had at least two mutations of its own, and while they appear to be less deadly they are also seemingly easier to transmit. Hospitals are again near capacity, and the beds are filled with mostly unvaccinated people. The vaccines and boosters do not protect as well against the omicron variant, but vaccinated people are less likely to get as sick and/or hospitalized as unvaccinated people. There is a growing sense that we are all going to get covid at some point. When this pandemic is looked back on in the future, historians may well be examining who DIDN'T get covid - and why?

The U.S. government is offering two covid test kits free of charge to each household. We ordered ours through the government-provided link, and they arrived in a couple of weeks via the postal service. I had previously ordered some from Amazon just to have on hand, so we are set with tests for the moment. Too bad I can't get reimbursed for those as they are costly at $19 per box.

Health experts are now saying that the medical paper masks that most people wear, as well as cloth masks, are not sufficient in protecting you against the spread of omicron. They recommend wearing an N95 mask (normally only used in hospital settings) instead. Those were in really short supply earlier in the pandemic, and we were all asked to save those for health care professionals. Somehow our government is now distributing 400 million N95 masks to citizens at no charge. Where did these come from? Who knows. It looks like you have to go to a pharmacy to get the masks, and each person can have three.

I think it's important to note that these mask are not washable and aren't meant to be reusable, so I'm not sure how that's going to work. In the meantime, I'll keep wearing my washable cloth mask - the one I made with a pocket to insert a filter. It's fitted, has a nose piece, and gives me four layers of protection, so I think I'm good as long as I continue to socially distance and stay away from crowded venues.

Posted by Kim Wolterman at 8:14 PM No comments: