Yesterday morning I had the repeat right breast core biopsy done. This time I went to the Siteman Cancer Center at Washington University. What a class act, all the way around! The staff, particularly in the treatment room, were exceptional friendly and kind. I had asked the radiologist to show me the film that was taken three weeks ago at the other hospital, and she pointed out the marker that had been left in. She then showed me where the architectural distortion is located, and that marker was nowhere near the distortion. I could see why that had all the radiologists and the breast surgeon concerned.

Unlike the first biopsy in July in which the radiologist was guided by an ultrasound, this time I laid face down on a table with my breast dropping through a square opening in the table. From there the breast was compressed in a 3D mammography machine while the doctors and technician made sure they were getting the correct spot. It felt like the skin from my neck was getting sucked down into the hole as they tightened the machine.

Then the injections were given to numb the breast, and the probe was inserted like last time. Unlike last time, however, I felt it. Ouch! They quickly administered more medicine, and I only felt pressure after that. In the previous biopsy a ceramic marker was left to mark where the tissue had been removed. The doctor had stayed away from a metal marker due to some allergies that I have with pierced earrings. Yesterday they placed a titanium marker as that is all they ever use, and it has a low rate of reaction. It is what is used in knee and hip replacements, so I guess I might as well find out now if I am going to react to it. They said I'll make the medical journals if it ends up being a problem for me. 🎶I am titanium...🎶

Adhesives also bother me, so they decided to try putting a liquid bandage over the small hole made by the probe. It should stay on for five or so days, and so far I am not reacting to it. I'm a little sore today, but keeping ahead of things with Tylenol and the cute ice pack they sent home with me home made a huge difference, I think.

When we left I was told that it would probably be Friday before I got the results of the biopsy back. But late this afternoon the breast surgeon called with the great news that the tissue came back benign! She added that we are officially not worrying about this spot any more, and I don't have to have a mammogram for twelve months. I'll need to follow up with my primary care doctor about that, though, as the other breast is due for a mammogram in June. As Scarlett would say, I'll worry about that tomorrow. Tonight I will sleep much easier.
Posted by Kim Wolterman at 9:41 PM 2 comments:

The second Women's March was held in St. Louis on Saturday, in conjunction with many more all across the United States and around the world. The event burst into existence last year, fueled largely by the election of Donald Trump as President, taking place the day after he was sworn into office. Over 400 marches were held in the U.S. with an estimated 3-5 million people taking part on that day. Ironically, the crowd in Washington, D.C. was three times the number of people who showed up for Trump's inauguration.

The estimate for this year's number of participants is much smaller, but the enthusiasm of the attendees has not waned. Men, women and children attended, many bearing signs summarizing their hopes, dreams or fears. Here in St. Louis the large crowd was friendly, well-behaved, and vocal in following chants led by volunteers.

I did not attend last year, so I don't have anything to compare this year's march to, but it was moving and powerful to stroll through the crowds, listen to people talk, and take photos of the action. My Women in Focus group has an upcoming show, and the theme is "Social Justice." The march seemed like a perfect opportunity to capture something for the show. While I think I accomplished that, I also changed my pre-conceived notions about large political gatherings and the people who attend them. While there were signs and causes I don't particularly agree with or support, isn't it great to live in a country where everyone has the right to gather, speak, and demonstrate their beliefs? 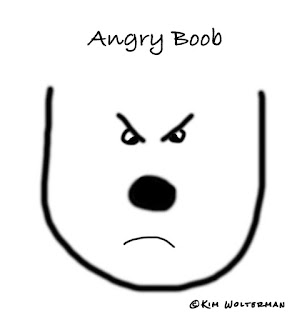 On the 8th I had the six month follow-up 3D mammogram as requested by the radiologist after the breast biopsy which was done on July 5th. After the test was done, I met with the radiologist to review the new scan. She is not the one who did my biopsy, but she works in the same breast healthcare center as Dr. H. She looked a little concerned, and proceeded to tell me that she thinks I should have a surgical biopsy done on the same spot that was detected six months ago. The same area (not a lump) that pathology ruled a stromal fibrosis. A fibrosis is not cancer, not even pre-cancerous, nor does it lead to cancer. So why another biopsy?

When I asked her that question, she answered in "what ifs". What if there are bad cells behind the ones that were taken? What if cancerous cells are hiding farther back? Really? The ultrasound-guided needle biopsy couldn't tell them that? When am I ever supposed to breathe a sigh of relief following a negative biopsy report?

She wanted me to go right down the hall and make an appointment with their breast surgeon for a consultation. She then proceeded to tell me how the surgical biopsy would go. I told her I would go home and check my calendar, then call the doctor. What I really meant was that I would take some time to think about it, and then make my decision. She had obviously planted seeds of doubt in my mind, so I knew that I would consult with a breast surgeon. But it would be one of my own choosing, not hers. Several of my friends have had breast cancer, so I talked with them and found they had all seen the same surgeon. After reading up on her and looking at online reviews, I decided she is the one I wanted to take care of me.

Jim and I met with Dr. J. yesterday for the consult. She had reviewed all of my mammograms and had met with the Washington University radiologists regarding them. They concurred that I need an additional biopsy. I asked her if there had been any change from the mammogram taken six months ago to the one taken last week, and she said nothing had changed. So why is everyone all of a sudden concerned?

Dr. J. explained that they were worried about the fact that the marker, which is left in the breast following any biopsy, was not placed in the exact location of the distortion that was seen on the mammogram. That indicates that perhaps the four tissue samples did not come from the actual distortion but instead were nearby tissue. That's when the lightbulb went off for me. No wonder the radiologist on Monday looked worried. But she didn't express her major "what if". What if Dr. H. took the wrong tissue???

Obviously I can choose to roll the dice and do nothing, but that is not how I want to play the game of life. Dr. J. offered two options - 1) have an additional needle biopsy done, this time a 3D mammogram-guided biopsy as opposed to an ultrasound-guided one, or 2) have a surgical biopsy done where more tissue would be removed. Obviously #2 is more invasive, and she said she really doesn't want to cut on me if she doesn't have to do so. She feels that a needle biopsy will be sufficient. And she added that if the results come back negative on this test, we can put this matter to rest.

So, I'm scheduled for the needle biopsy on January 30th. This time I know what to expect, so I'm not looking forward to it. Especially since my breast will be squished in the mammogram machine while they are taking six pieces of tissue out. On the other hand, the recovery time will not be as long, so there is that. Any positive thoughts and prayers you can send my way will be most appreciated!
Posted by Kim Wolterman at 3:27 PM 2 comments:

Like most areas of the United States, St. Louis has been in a long, drawn out cold spell. We were sick of being stuck inside, so last Saturday my husband, one of our friends and I set out to take some photographs. Though the temperature was under 20 degrees, the sun was out and there was little wind. So we bundled up in long underwear, hats and scarves and headed first to nearby Clayton. Jim's company had designed a new plaza in the downtown area, and while I had seen it under construction I had not been back once it was completed. The ice on the waterfalls and pond made the spot very picturesque.
Once we left Clayton, we drove to Forest Park. We were quite surprised to see ice skaters on the Emerson Grand Basin. There is a designated ice rink in Forest Park, but perhaps the open waters called to these folks. We were able to snap a few pictures of them before the park rangers came along and told them to move to a safer area. With the fountains still functioning, ice around them can be thin to non-existent. Having said that, after testing the ice near the edge of the basin and finding it to be several inches thick, I couldn't resist getting a quick picture of myself on the ice as well.

We then continued driving through the park, and found a couple other areas to shoot as well. The Muny bandstand is pretty in all seasons, but this was the first time I have photographed it with the lake completely frozen over.
By then we were quite chilled, so we headed to nearby Seamus McDaniels for lunch and to warm up. It was great to get out of the house for a bit.

Posted by Kim Wolterman at 12:02 PM No comments: