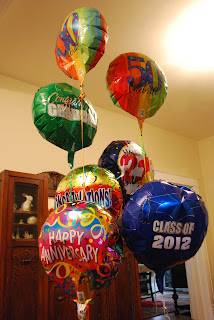 Our family has a lot of big events occurring in 2012. Jim's mom and dad celebrated their 60th wedding anniversary early this year, his older sister turns 60 later this year, his younger sister turns 50, and Katie turns 21. Add to that the fact that Katie graduated from college and Megan just received her master's degree, and you have plenty of reasons to party. (Jim also has received an amazing accolade, but we are not allowed to talk about it until the national announcement is made, so more on that later.) Since we are all spread out, we decided to have one big celebration over Memorial Day weekend.

My in-laws including Jim's sister and her husband drove down on Friday, and Katie flew in Friday night. Andy and Megan flew in on Saturday afternoon as Megan had her last class Saturday morning. Jim's younger sister and her fiance come over from Kansas City on Sunday morning as they had a wedding to attend on Saturday. We had a barbeque in our backyard Sunday afternoon, which of course had to be the hottest day of the year so far. Thank goodness it was breezy and fairly low humidity, as we were able to sit outside most of the day.

We hired Jim's motorcycle buddy, Jim Diaz, to take some photos before the party began. Jim is a professional photographer, and it has been many years since we had Wolterman family portraits taken. There are too many "exes" in that group shot to warrant keeping the old photo on the wall. Hopefully we will get a group shot where everyone has a decent expression on their face and their eyes open. We shall see.

The party was a great success, and it was wonderful to have Jim's whole family together. Frankly I don't know when my children will be together at the same time with their grandparents in the future. Jim's folks had not been here since Katie graduated from high school in 2009. So this weekend was all the more special because of that. The pictures will help us keep the memories alive.
Posted by Kim Wolterman at 5:55 PM 1 comment:

Last week I attended the National Genealogical Society's (NGS) annual conference in Cincinnati. I was quite excited that it was taking place there as that is where I was born. For once many of the conference topics would be on point for my research. The only other NGS conference I have attended took place in St. Louis many years ago. As a member of the host organization, the St. Louis Genealogical Society, I had volunteered to take care of publicity for the event. Wow - what a job that was! Any way, my sister drove over with me on Tuesday and we both spent the night at my cousin's house. Kathy then drove me to the hotel the next morning, and I checked into one of the conference hotels for three nights. Kathy stayed out at my cousins, but I wanted to be downtown so I could easily get to the meetings. Since they ran from 8:00 a.m. until 5:00 p.m., I didn't want to have to deal with the long drive each way every day.

The conference was good, and I picked up some new tips and tricks. But for me the best part came on Thursday evening when they kept the library open just for conference attendees. We had the library to ourselves (all 400 of us!) from 6:30 until 11:30 p.m. It was great! I lasted until 11:00 before I headed back to my hotel. That probably wasn't one of my better decisions, since I walked back all by myself. Luckily I did not end up as a statistic in the Friday morning issue of the Cincinnati Enquirer.

I was able to have dinner and drinks one evening with my cousin, Gina, and that was quite fun. Then on Thursday for lunch I met one of my third cousins for the first time. We had exchanged emails about our common Metz ancestor years ago. More recently we have been friends on Facebook. But to be able to meet him in person was wonderful. It was as if we had always been friends. We went to a place called Tom + Chee (because all they serve is tomato soup and grilled cheese sandwiches). The restaurant was featured on the show Man v. Food, and as a fan of the show I was excited to eat there. Since it was Cincinnati, of course I had to get the sandwich with goetta on it. Yum!

Unfortunately early in the morning on Saturday I began to feel really sick. At 8:00 I called my sister and asked her to come and pick me up. So I missed the entire last day of the conference but it could not be helped. I think I got sick from the Chinese food I had eaten Friday night. The worst part was that I did not get to go out to eat with my aunts and cousins Saturday night, which is something I was very much looking forward to doing. But I did feel well enough by Sunday that I was able to drive us back home. Happy Mother's Day to me.
Posted by Kim Wolterman at 6:10 PM 1 comment:

Our nest is empty now - well, except for the toys that we are holding onto until the kids get houses of their own. Then we will get rid of those items as well. I spent a couple of weeks taking all of Katie's stuff out of the plastic containers we had put them in when we moved it all to the basement. She does not have room to store the containers in her studio apartment, so it all needed to be put into cardboard boxes so that she can recycle those as she unpacks.

Originally I had thought that I would drive all of her stuff out to Los Angeles. But after pricing renting a truck and then adding on hotel rooms, gas, food, and two plane tickets home, that got pretty expensive. Then I looked at taking my own car and hitching a trailer to the back, but that left me with all of the expenses except the plane tickets. By the time I calculated my time (and that of another person to go with me), the additional hotel rooms and food for the return drive, and the wear and tear on my car, that got pricey as well. Plus having recently made the drive, I am not too excited to hop in the car again for that long of a trip.

So that left us with the option of having someone else handle the move. We decided to hire a national company called The Packaging Store to move her belongings. My neighbor owns the local franchise so I had him come over to give me a price on the move. Ugh! It was about $1,400 more than we were hoping for, so I called some other sources. The bottom line is that it really depends on the weight of the items being moved. One company was quite a bit less expensive, but the reviews online were not that favorable, and they don't have an office here in St. Louis. I have no idea where the driver would come from. Going with The Packaging Store seemed to be the best alternative, and I like the fact that I have someone close to call if there is an issue.

I was able to use a lot of the office boxes we had left from when we sold ORMI. That saved me a bunch on buying cardboard boxes. I had to use some of their boxes for the bigger and/or heavier things, but I cleaned out our supply so that was good all the way around. Larger things like her desk and a couple of pole lamps I left for them to box up. On Tuesday they came and got everything. They took it all back to their warehouse, where they weigh it, put it on pallets, and shrink wrap it. Sometime this upcoming week it will be loaded onto a tractor trailer. The good news is that the actual weight was considerably less than Ray had estimated, so our bill came right in at what we were originally hoping for - yay!

They estimate 10 working days to get the items to her. One of the reasons it is taking a little longer is that we ordered the extra service on the other end where the stuff will all be put on a local delivery truck. First of all we needed a smaller truck there so that they can actually drive to the back of the apartment complex and use the elevator right by her apartment. Second, two men will actually bring all of it into her apartment so she doesn't have to haul it all around herself. They would have unpacked for her as well, but we didn't add that service on. 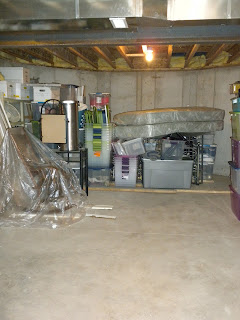 We can now reclaim a good portion of our basement, not to mention Katie's room on the third floor. I don't think it has really sunk in yet that she won't be living here anymore. She has been gone so much lately with all of her studies abroad that it kind of just feels like she is away at school right now. But she has already mentioned that it feels weird that the third floor is no longer "her" bedroom. I guess it will take me a little longer to get to that point. While our place here is an empty nest, in a short while she will get all the items to begin feathering hers.
Posted by Kim Wolterman at 2:43 PM No comments: