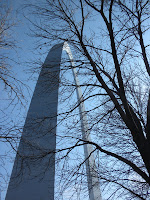 Man, I am worn out. As previously mentioned, Katie and her roommate are here for spring break. I picked them up at the MegaBus stop Friday afternoon. I then fixed lasagna, cheese garlic bread and a salad for supper, followed by ice cream sandwich cake. Yum! This is not the way to take off the extra pounds I added on the cruise ship. Saturday the girls took off for the zoo and art museum, and I worked on my presentation about traditional publishing versus self-publishing. I was on the program at Borders that night with other SLPA members. Jim went off on a motorcycle ride for the afternoon.

Yesterday we went to Crown Candy for lunch, and that took a big chunk of time since we had to wait nearly an hour to get a table. Then we went downtown to the arch, and unfortunately all the tram rides for the rest of the day were sold out. They are only operating one tram currently. It was packed since this is a big spring break week. We did get some nice photographs of the arch outside anyway. Then Katie and Fay took off for the Loop, while Jim and I stopped at SWT so he could check on some work. We walked home from there since the girls had dropped us off. It is about 2 miles from home, so at least we were able to get some additional exercise. Last night we hung around the sitting out on the deck since it was so nice outside.

Fay leaves on the 4:35 bus this afternoon, so I'll see what they want to do until she has to go. I could take them back downtown to the arch, or we could go to the botanical garden. It is a nice day for doing either one of those things.
Posted by Kim Wolterman at 9:08 AM 1 comment:

Tomorrow Katie and her roommate Fay, who is from China, are coming here for spring break. We are excited as we barely had time to meet Fay when we moved Katie into the apartment in September. I am picking the girls up at the MegaBus stop at Union Station at 2:30, and then it sounds as if they will hit the ground running. It tires me out just listening to the itinerary. So many things to see and do before Fay heads back to Chicago Monday afternoon.

I have been on a cleaning rampage for the past two days. I guess since it was 82 outside today it can count as my spring cleaning. I think I'll be ready in time. I need to do the guest bathroom yet, but since that is the one that Jim uses I'll have to wait until he goes to work tomorrow morning. I also need to go to the store. I am going to make my lasagna with a salad and garlic bread for supper tomorrow night. Katie and I thought it would be nice for Fay to have a home cooked meal for a change. After tomorrow night they will be on the go so much I don't know if I'll even be cooking supper for them again.

To add to the confusion around here, we are doing some remodeling on the garage. I had suggested to Jim that we put a larger garage door on (it only had a single door with a man door next to it) so that he wouldn't have to move his car out of the way to get a motorcycle out. Of course they would pick this week to begin construction. Everything had to be moved out of the garage, so it is a little messy out back. I hate for Fay to see it that way, but I can't do anything about it. I think we'll be able to move some stuff and a car back in by this this weekend, so we can get it cleaned up a little anyway.
Posted by Kim Wolterman at 8:37 PM No comments:

....down memory lane. I have enjoyed catching up with old classmates on facebook. The other day, one of them mentioned that he keeps in contact with Mr. Wadden, one of our teachers from high school. Mr. Wadden taught Advanced Placement English, and he was "that" teacher for me. The one you remember even though thirty-plus years have passed. The first day of class, he released a litany of expectations for the class that led to at least five students dropping out. I admit, I considered it. It was my senior year - did I really want to work that hard? But I really loved reading, writing and English, so I stuck it out. Mr. Wadden was an amazing instructor. I really think he gave his little speech at the beginning to "separate the men from the boys", so to speak. The class was challenging, for sure, but it was also thought-provoking and lots of fun.

So I got Mr. Wadden's email address from Bruce, and I contacted him not really expecting too much in the way of a reply. Boy, was I surprised! Mr. Wadden remembered me quite well, down to the fact that I transferred classes second semester so I could be with my good friend, Kim. "Didn't you guys call yourselves the Kimmys or something?", he asked. Close - we called ourselves the Kimlers, because I was Kim Kubler and she was Kim Taylor. He also remember that I was headed to Iowa State to major in Mass Communications. I told him about my two degrees and the fact that I have published a book. I added that he is the reason I was able to accomplish that feat, as he provided me with the skills to succeed in college and to be a good writer.

He said that he wasn't surprised that I had written a book because my highest grades were always with my writing in his class. He went on to say a lot if really nice things, which I won't repeat here. But I know that on a down day when I question what I am doing and if it makes difference, I will pull out his email for a boost.

Did a teacher make a difference in your life? Write and tell them so.
Posted by Kim Wolterman at 12:51 PM 3 comments:

Back in the (Cold) Saddle

We just returned from a week long cruise in the Eastern Caribbean aboard the Celebrity Eclipse. What a fantastic ship! Our friends Kathy & Paul Corbin joined us again, as they did 2 years ago when we celebrated our 30th wedding anniversary in the Western Caribbean on the Ruby Princess. Kathy and I not only graduated from high school together, but we also attended Iowa State where we met our respective spouses. Coincidentally, Jim and Paul were fraternity brothers. Kathy and Paul sang at our wedding. They are the type of people that you can pick right back up with no matter how much time has passed since you have seen them.

We flew to Miami for this cruise, and our room was right next to the Corbins. We were able to open up the glass divider between the balconies so that we could sit outside together. I was a little concerned because the rooms were at the very front of the ship, which can be bumpy. But none of us had any problems with the waves. The staterooms were by far the best we have had (in our limited experience). They were spacious and very well appointed. The whole ship was beautiful and the staff was excellent.

We spent late Saturday afternoon and all of Sunday at sea before arriving in San Juan on Monday. We met up with a friend of Paul's, who took us on a walking tour of old San Juan. It reminded me of New Orleans, but with narrower, hilly roads. Then Tuesday we arrived at St. Maarten, and Jim and I went on a snorkeling expedition. It was a lot of fun, but the snorkeling was not too great. Kathy and Paul scuba dive, so they booked a scuba trip.

Wednesday was Jim's 55th birthday, and we spent it on St. Kitts. We had rented scooters to tour the island. It is not very large, so you can make it around the island in 2-3 hours. The first thing is that they drive on the opposite side of the road. I am sort of comfortable doing that, but I was not sure if I wanted to try it on a scooter. Especially since I have never been on a scooter before, much less operated one. Then I saw the size of the scooter as they were going over all the features of them. They were bigger than the Vespa size I thought we were getting. I reluctantly decided I would ride behind Jim. Now, I should mention that I have never gotten on his motorcycle with him. I have control issues and I don't like sitting behind him whether on a motorcycle, jet ski, bike or whatever. But it seemed the lesser of two evils. Unfortunately they did not have a larger scooter, and this thing was really not a bicycle built for two, let me tell you. The seat was small, and the foot pegs for the second passenger were minuscule. At one point going up a hill I had to get off and walk because it didn't have enough power to take both of us. I know we had been eating a lot at the buffets, but come on!

Anyway, we took off. The roads sucked, but at least the traffic wasn't too bad once we got out of town. Then it started to rain, and I'm not talking liquid sunshine here. It poured! I had just gotten comfortable (sort of) with Jim's driving, and now I was fearing slippery roads and a wipe out. Plus the buses would fly by, cut back over in front of us and create a tsunami of water flying at us. There was no place to take shelter and we had no rain gear. So we kept going, despite chattering teeth and the fact that we were freezing. The sun would pop out, we would begin to dry, and then the rains would come again. This happened multiple times during the day. I was never so thankful as I was when I saw the scooter rental shop. Ughhhh!!! NEVER want to do that again!

Thursday and Friday were days at sea, so we played trivia games, hung out at the pool, saw shows and just relaxed. It was hard to come back to 39 degree weather and gray skies. But it is good to be home.
Posted by Kim Wolterman at 8:07 PM No comments: