Just a Walk in the Park

We had an unseasonably warm weekend here in St. Louis, so Jim and I took advantage of the weather on Sunday and took Kirby to Laumeier Sculpture Park, a 105-acre open-air museum and park. Located on property that contains a 1917 Tudor mansion once owned by Henry and Matilda Laumeier, the park is most noted for all the interesting and unique sculptures placed throughout the property. But we really enjoy walking the trails that are nestled back in the woods. The gentle hills and valleys are just challenging enough to get your heart rate up without worrying that you'll need CPR when you arrive at the top.

We thought that the park would be very crowded considering the mildness of the day, but perhaps everyone went to the zoo instead. We had the place pretty much to ourselves for most of the visit. That was perfect for us, and Kirby enjoyed all the new smells he gets to check out when we're in the woods. We are blessed to have so many great parks in the area so we can try out different walks.

Posted by Kim Wolterman at 6:40 PM No comments:

Despite living in St. Louis for thirty-seven years, I have never attended the Mardi Gras parade here. Once when our son was a toddler, my husband and I took him downtown to the St. Patrick's Day parade. Arriving early, we secured a nice spot where our little guy would be able to actually see the parade. Unfortunately arriving early also gave us all the opportunity to see folks puking up their green beer. As if that was't enough, some johny come latelys pushed and shoved their was to the curb, knocking my family right out of the way. That was it for us, and since then we stick to our lovely, local 4th of July parade. If there is ever any puking, I haven't seen it.

My photographer friend asked me if I wanted to go with her to the Mardi Gras parade this year to take photos. She explained that she goes down to the Soulard area early to photograph the people and all the other trappings that the event brings. As it promised to be a beautiful day, I agreed to go with her. She picked me up at 9:00 on Saturday, and we headed to the Shrewsbury MetroLink Station. The beauty of this station is that it is the beginning of the line. You can always be assured of a seat on the way to wherever you are headed. After several more stops, it was standing room only on the train. On the advice of Mardi Gras organizers we got off at the Civic Center stop, where for $6 you could purchase a round trip bus ticket and be dropped off near the parade route. I have to say, it was a great system. We had no wait time for a bus on either the way to or from the festivities.

The people watching was everything my friend assured me it would be, and it was fun to take pictures and observe human nature at its not always finest. We very quickly concluded that we were several decades older than the average party-goer, despite it being the morning. I could not believe how many times people (always young men) felt the need to talk (yell) at me about what I was photographing. "Why are you taking pictures of a door? You should be taking pictures of us!" This was always followed by them trying to photobomb my shot. And when I photographed a cat in a window? "Are you taking a picture of the pussy in the window? She's photographing pussy!" Oh yes, you're a clever one, aren't you? But really, how could I pass up this cat who looks like she is thinking, "What in the world are all these people doing here?"

We wandered up and down the many streets that were closed for the occasion, and it was a great opportunity to study and photograph the incredible architecture in this historic part of St. Louis. Normally there are cars blocking the way, but on Saturday we only had to wait for the drunks to stumble on by. I'd like to say that they were few and far between, but that would be a lie. And despite the supposed crackdown on public urination (and the presence of 1,000 porta-potties), I still saw men peeing wherever they pleased. It was annoying yet sad at the same time. I wanted to take a video of these kids and send it to them when they are older (and sober).

We actually did see a little of the parade and I was amazed at the jostling that went on in the crowd, all in an effort to secure the $.10 strands of beads as they were thrown from the floats. As the music grew loader (and it was all about that bass, 'bout that bass, no treble...), and the crowds grew thicker (and more drunk), it was time for the seniors to head on back to the bus and find a more civilized place to have lunch.

The bottom line is that while I had a good time with my friend and love the photos that I took, I won't hurry back for this event. It appears that little has changed in the 30 years since I last attended a parade downtown. There is still too much drinking, puking, and shoving going on. 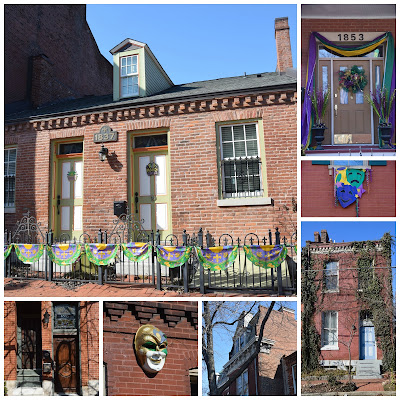 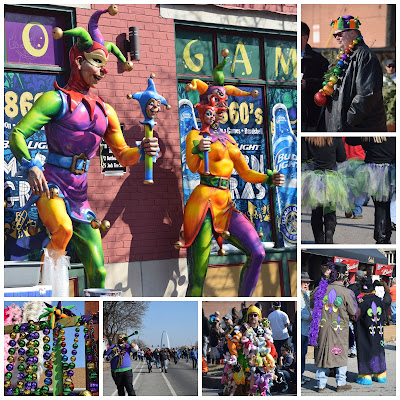 Saturday was Fete de Glace, an ice festival complete with an ice carving competition in St. Charles, Missouri. I have never attended this event before, so when a fellow photographer friend asked me to go with her, I jumped at the chance. We arrived around noon to find the streets crowded with people and all kinds of dogs. That made for good people watching in addition to seeing the ice men in action.

The weather was unseasonably warm at 66 degrees, and while the temperature was great for the attendees, it created a few challenges for the competitors. Several of the sculptures were already completed by the time we hit the streets. The warm, sunny day was taking its toll on them, and like the Wicked Witch of the West in the "Wizard of Oz" they were melting...melting into the cobbled pavers on Main Street.


The workmanship was incredible, and it was interesting to see the tools of the trade that were used. From the chain saws at the beginning of the process to the scalpels wielded like surgeons at the end, it was something to experience. When I see artistic efforts like this, I always wonder how the creators feel knowing that their design is so short-lived, not unlike sand sculptures and sidewalk chalk drawings. That would make me sad.

We had a nice lunch at Lewis & Clark's before rejoining the crowds in the streets. We were lucky enough to have timed it so that we saw a few new blocks of ice being reinvented. It was obvious that it takes patience, skill and vision to create these frozen works of art. What a fun day!

Posted by Kim Wolterman at 11:50 AM No comments: