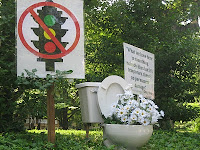 No, I'm not talking about kids in the area who may be smoking marijuana for "medicinal purposes", although I'm sure they are out there. And in fact the man I am referring to may just have smoked a little too much weed in the 60's or 70's, which may explain his irrational behavior. It all started with 4 way stop sign at the corner of Elm and Swon, where this man happens to live. Mr. Hothead moved in a few years ago just as the city had decided to replace the stop signs with stop lights in preparation of the closure of Highway 40 for two years. Apparently it sounded like the stop lights would be temporary, and would be removed at the end of the construction. But the city left an opening by stating that the issue would be re-evaluated by the city council when I-64 (the former Highway 40) reopened. As soon as the stop lights went in, my husband and I figured they weren't going anywhere as they are nice stop lights - architecturally correct in size, scale and appearance for an historic community.

Over the two year time period studies were conducted by traffic consultants, and a review of accident reports was undertaken by the police department. It appeared conclusive that not only did traffic move a lot better on Elm, there were fewer traffic accidents at the intersection than when the stop signs were in place. As one of the earlier statistics (a lady ran her stop sign and t-boned my minivan - totaling it and sending us both to the hospital - in 2004), I knew how unsafe the old intersection had been. As rumors circulated that the lights were going to remain, signs illustrating a stop light with the "no" symbol through them popped up, and a flurry of letters to the editor of our local newspaper ensued. Each one began with "I live on the corner of Elm and Swon..." I told Jim that I never realized there were 10 houses on that corner! How did they all live on the corner of Elm and Swon? Especially since I knew the people in 2 of the houses were in favor of the lights.

In the end, the city council voted to keep the stop lights. No longer content to express his anger with his "no stop light" signage, Mr. Hothead placed a porcelain toilet in the corner of his lot closest to the stop light. And that is how my neighbor went from being a Hothead to a Pothead. He also added a quote, no doubt taken out of context, from a council woman on an additional sign. This all happened a couple of days before we were going to be on the house and garden tour. All I could think is that here we were going to be having people from all over the greater metropolitan area coming to our town, and this is what they were going to see. Plus, the day after the tour, the judges from America in Bloom were coming to look at Webster Groves as a potential recipient of the 2010 America in Bloom community. How was this going to look?

I called city hall and explained my concerns, and asked about the code for items placed in a front yard. I know we have a sign ordinance that must be complied with, but can you have a toilet out front? The woman said she would have a code enforcement officer stop by the house. This was on a Friday and two days later for the day of the tour, the signs and toilet were gone. Sadly, on Monday the toilet was back in full bloom along with a new sign quoting (misquoting?) the mayor. So the America in Bloom judges undoubtedly saw his pilgrimage, as he is on the main street of our town. I'm sure there is a photo of the display on their blog somewhere. But the tide is turning on old Pothead. Several letters to the editor last Friday were directed at him, basically stating that if all he has to complain about in life is a stop light then he should be counting his blessings. Another writer advised Pothead to "get a life". I just think our town is going to pot.
Posted by Kim Wolterman at 12:39 PM

Funny! I'm surprised he hasn't made CNN yet! It takes all kinds, doesn't it?

I'll sic Grandma Hooter on him! He'll MOVE THAT BOWL!