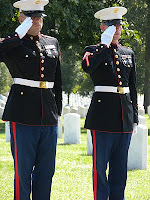 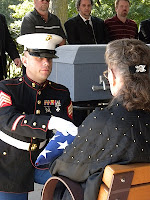 On September 12th my niece's father-in-law died at the nursing home where he had been staying for the past couple of years. Ralph was 88 years old, but his mind and body had checked out a while back. I last saw him at our family Christmas gathering, and he was in tough shape then. One thing that hadn't faded was his sense of humor. He was quite a character! As Ralph and his wife Emily had no church of their own, my niece's pastor offered to have the funeral at their church in Cahokia. It was very touching and moving, especially considering the pastor had only met Ralph on a couple of occasions. One particular statement he made has stayed with me. "We can spend time or we can waste time, but we can never make time." As a veteran Marine of both WWII and the Korean War, Ralph was eligible to be buried at Jefferson Barracks Cemetery. They provided a full military ceremony, complete with the firing of the rifles and the playing of Taps. A military funeral is something that touches everyone in attendance, and there were no dry eyes in our group. R.I.P. Ralph - you earned it.

My mother-in-law turns 80 tomorrow, and we all traveled to Iowa last weekend to celebrate with her. Jim and I stopped at the St. Louis University Lay Education Center near Bowling Green on our way up to see what that was all about. It is a sculpture garden, and it has a cemetery next to it that was established in 1831. Very interesting! We also stopped at a few barn quilts on the way so that I could take some photographs. Unfortunately the day was dreary and we were on a bit of a schedule, so I only got to photograph 4 of them.

On Friday we attended the Charles City homecoming parade. It was fun to see all the kids in the parade, and strange to think that Jim would have been on the flatbed truck with the other football players more than 30 years ago. Saturday we hit the Farmer's Market in the morning and a quilt show in the afternoon before going to Mass. That night 10 of us took Lorraine out to supper in nearby New Hampton. Great food! Sunday Jim's sister had us all over for brunch before we had to leave for home.

Monday of this week my brother-in-law turned 65. On Saturday Jim and I will have 12 people here for a barbecue to celebrate this milestone. Emily will come, but we sure will miss Big Ralph!
Posted by Kim Wolterman at 7:33 PM

RIP, Big Ralph. Thanks for your service to our country.

A military funeral is something special, and emotional.