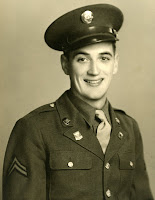 This is a very unusual Father's Day. Just like Mother's Day, we have no children here to celebrate the day with. But that is not bad since there is no dad here to celebrate with either. Jim is off on his annual epic motorcycle trip. I was surprised that they picked this week due to Father's Day occurring this weekend. Not so much from Jim's perspective, but the other three guys are all dads as well.

I guess I will be up for the bad daughter-in-law of the year award because I forgot to send Jim's dad a card. I have never forgotten before, so I will blame it on the fact that we were not making any Father's Day plans around here to tickle my memory. That's my story, and I'm sticking to it! I will call Jerry tonight and hope that a phone conversation makes up for my memory lapse on the card.

I find myself thinking about my own dad today, in part because of finally completing the book I was writing about his time period in the war. But also my cousin posted a really heart wrenching story on Facebook this morning written by a man whose dad died at a fairly young age. There were lots of things they wanted to do together, planned during a period when they thought they had all the time in the world. I feel that way about my mom, since she died when I was only 33. But we got to have my dad a lot longer than that, so I was blessed that way.

You held my hand
to keep me grounded
You let it go
So I could fly
I held your hand
as you lay dying
Then let it go
So you could soar
Posted by Kim Wolterman at 12:06 PM

Oh, that is so bittersweet....