Like most Americans I recall very distinctly what I was doing when the planes crashed into the towers in New York City. I had taken the kids to school, and had just sat down in our breakfast nook with a bowl of cereal. I had turned on "The Today Show" to catch up on the news before beginning my day. Katie Couric was reporting on the plane hitting the first tower, and they were speculating as to whether or not it had been pilot error. But as we watched live footage of the second plane hit the remaining tower, we all knew that the unthinkable had occurred - America was being attacked on its own soil. Like the assassination of President John F. Kennedy, it was a day etched forever in my memory.

It is hard to believe that ten years have elapsed since that fateful day in American history. This significant anniversary brought with it renewed fears that our enemies would capitalize on the media coverage of the day and launch another attack. I watched a bit of the news coverage this morning, but then had to turn it off as the media once again began to sensationalize everything all in the name of ratings.

My niece chose today to celebrate her daughter's upcoming 16th birthday. She thought about the date, and decided that we all needed something positive and happy for this day, instead of letting the terrorists win by hiding from our own shadows. In the midst of all the fear and negativity we live with right now, it was refreshing to enjoy the laughter of the teens and the innocence of all of the Hello Kitty gifts that Molly received.

But on our way home, Jim and I stopped at Forest Park to view the 9-11 memorial that had been created there. Nearly 3,000 flags, each bearing the name of a victim from September 11, 2001, dot the hillside in front of the St. Louis Art Museum. It is an amazing and moving site, and having a visual such as all the flags helps you to comprehend just how many people lost their lives that day. God Bless America! 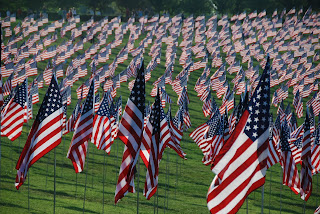 Posted by Kim Wolterman at 9:14 PM