Funeral for a (Young) Friend 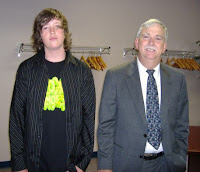 A week ago Saturday my brother's 20 year old son died suddenly. This is the same brother who lost his wife to cancer 11 years ago, leaving him with 3 small children to raise. My brother happily remarried two years ago, but due to scheduling conflicts we had not yet met his new wife. What a tragic reason for bringing all of us together! Jim and I flew out to Colorado on Tuesday as the funeral was going to be held on Wednesday morning. All of my other siblings arrived that day as well, and we stayed at the same hotel. We have not been together since my son's wedding 4 1/2 years ago, which is the last time that most of us had seen my nephew.

The funeral was very sad, but the priests did a really nice job of making it personal for the family and trying to make sense out of a senseless situation. After the Mass there was a reception (odd word choice for something following a funeral) downstairs at the church. My nephew's artwork was prominently displayed, and boy did he ever have some talent! They also were playing a slide show timed to music, which was both hard to watch and yet somewhat soul soothing.

Later in the day we all met up at my brother's house as people had been bringing lots of food by. It was nice to be able to spend time with my family as well as with the family of my sister-in-law. I am so happy that my brother has another wonderful woman in his life, and it is clear that the girls love and respect her.

On Thursday Jim and I flew to Los Angeles to see Katie. That part of the trip had been previously planned, and after some discussion we decided to go ahead with our visit. I really needed to hug my 21 year old.
Posted by Kim Wolterman at 2:33 PM

So sorry to hear this news about your young nephew.... I will pray for him and for your family.

It serves as a sad reminder that you never know what is around the corner; it's always later than we think....