We are having a relatively quiet 4th of July around here. Thursday morning Jim and I went to the parade as we always do when we are in town. It is such a great experience. We met a really nice couple who sat on the parkway next to us. They have four children, and the younger two were with them while the older two walked in the parade. It ends up that their 10 year old daughter is best friends with the family who moved in next door to us two years ago. We kept our opinions of them to ourselves. But as we talked about other things I learned that the woman's mother is first generation American from Scotland, while her dad is from Switzerland (and the two met in Africa!). The husband's mom is from Ireland. It is rare to meet anyone who is first generation these days, at least in my little world. Since we arrived at the parade route early in order to secure a coveted spot in the shade, it helped pass the time conversing with new people. 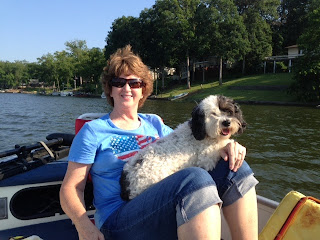 Later in the day we went to the lake house of Jim's business partner, located a mere 45 minutes from our house. I brought some snacks and a Patriotic Bundt Cake, and we had fun boating and enjoying the grilled shishkabobs and later the fireworks. It was different sitting in the middle of the lake on a boat as the fireworks were set off. I did miss our fireworks in Webster Groves though. They always put on a good show. 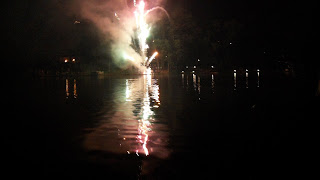 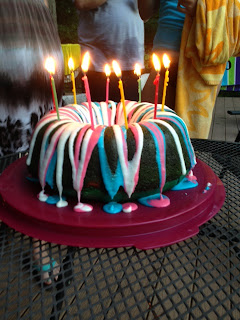 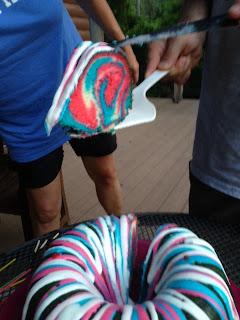 Friday I began the day with a tough work out at the fitness center, and then ruined it all by having a margarita with chips and salsa at the Hacienda. We met our old next door neighbors for lunch there, and it was fun to catch up with them and all their activities. Then today we took our bikes out to Route 66 State Park and road for about an hour before it got too hot. So far it has been a great holiday! Happy 4th!

Posted by Kim Wolterman at 4:17 PM

"We kept our opinions of them to ourselves." LOL