Last weekend we traveled to Des Moines for my high school reunion. It was a big one - the 40th. I can remember when I was in college and someone would mention that they were attending their 20th high school reunion. I would smile and say "How fun!" while inside I was thinking "Man, you're old!" And here I am at double that. I have attended the 10th, 15th, 20th and 30th reunions in the past, and I have always had a good time. This year was no exception. I am lucky in that two of my husband's fraternity brothers also attend these events - one who was a classmate of mine (and in fact is responsible for Jim and me meeting at Iowa State), and one who married a classmate of mine. Add in the classmates that Jim met while we were at the same university, and that equals a spouse who doesn't mind going with me as he always has people to talk to as well.

Another fraternity brother and his wife put up two of the reunion couples, so we got to visit them as well. Friday night was at Saints in Beaverdale, where we had an air conditioned room (thank goodness, as the St. Louis heat and humidity traveled north with us) and also the patio to gather in. I had invited my advanced placement English teacher to come, and he and his wife made it to the Friday event. I was thrilled to see him, because even though we have been corresponding via email, I have not set eyes on him since I graduated. Because he instilled in me a deep appreciation of the (well) written word, he is largely responsible for me being a published author today.

Saturday morning I had coffee (or tea, in my case) with two neighbors who lived across the street from me in Des Moines. I used to baby-sit for both of them, and we had reconnected on Facebook. What a fun time reminiscing about Bel-Aire Road! They both look amazing, and I am so glad we had a chance to catch up.

Next I met back up with my group for lunch at the Tavern so that I could order a grinder. It used to have a name that is now considered a racial slur, so I call mine the Iowa grinder. Essentially it is a finely ground Italian sausage sandwich. I have tried to replicate the recipe, but something is off so I wanted to see if we could detect the difference. I had been told that it might be the Italian sausage I buy here, so we later made a trip to Graziano's grocery store to buy some to take home. But first I went down the street from the Tavern to see another mom from my street. Her son graduated with me, and I just loved her and her husband so I popped into her store to surprise her. More walks down memory lane!

Saturday night's reunion event was held at Legends in downtown Des Moines. At this location we were on the outside patio, and it was a little hot out. It was a good thing we had stopped across the street for a drink first. The concoction we were all drinking was called a Blue Motherf*cker - no kidding. It was a blue Long Island Tea. Yum! But it was also good that I stopped at one, and then drank ice water at the reunion. 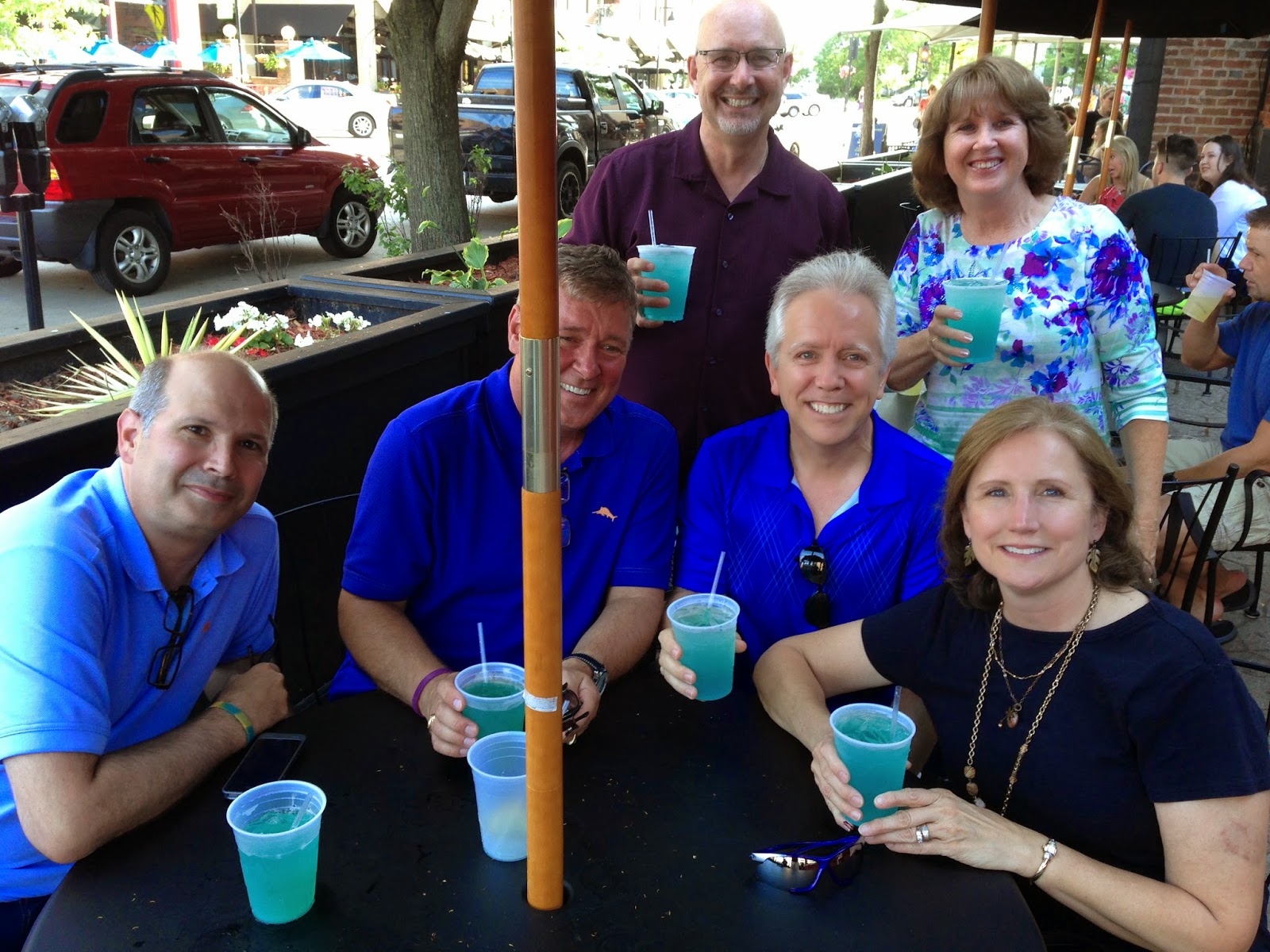 Some of the same people from Friday attended Saturday night, but there were some new faces as well. I guess that is why a two night event makes sense. Eventually we headed inside to a room at the bar where we could watch the movies that were made by some of our film students back in 1974. I even had a cameo in one of them. Several more of our teachers attended, including my speech teacher. I also learned a lot about presentation style and being comfortable in front of groups from him, so I appreciated the opportunity to tell him that.

Sunday four of us drove up to Ames to see the changes to the Iowa State campus, and then our friends drove on back home to Minneapolis. We went back to Des Moines to spend one more night with our hosts. Monday morning we took off for Brooklyn, Iowa where Jim was born. We drove around the town and had a wonderful pork tenderloin sandwich before going on to LeClaire, Iowa. We are fans of the History Channel cable show "American Pickers", and this town is where Mike Wolfe of the show has a store called Antique Archaeology. While it was not exactly on our way home, I am so glad that we stopped. It was fun to see where some of the items on the show end up to be sold.


Overall, a great trip and one that proves you can, indeed, go home again. Till next time, Hoover Huskies!

Posted by Kim Wolterman at 9:39 PM

I will say it again: Nobody has more fun than you! That is great that you were able to see--and tell--the teachers that had such an impact on your writing/ publishing and marketing endeavors. They had to be thrilled to find out how much they meant to you.

I had to come back and say that those pickers have as much fun as you do! What a way to make a living!

They do seem to have a good time. As much as I love old stuff I would not want to dig through some of the piles they have come across though.