A friend had invited me to the second meeting of a new organization in town, Women in Focus St. Louis. The purpose of the group is to network with other female photographers, and to support and promote photographic arts. Women in Focus began in Atlanta. When one of their members, Tiffany Weigel, relocated to Chicago in 2014, she started a group there. As she now lives in St. Louis, she wanted to bring the idea here as well.

At first I was hesitant to attend a meeting, thinking that it was only for women who take photographs for a living. But then I thought, what the heck, they can always tell me not to come back if it isn't a good fit. Around 16 women attended the second meeting, which was in February, and the group is about half and half in terms of professionals versus serious enthusiasts. So it is a nice mixture of backgrounds.

Tiffany want us to go on field trips together as well as participate in "photo shows." Our first field trip was to the International Photography Hall of Fame in Grand Center. Who knew? I didn't realize St. Louis has such a museum. It relocated here from Oklahoma City nearly two years ago. While the Hall of Fame is rather small, the current exhibit of photos of St. Louis architecture was very interesting. 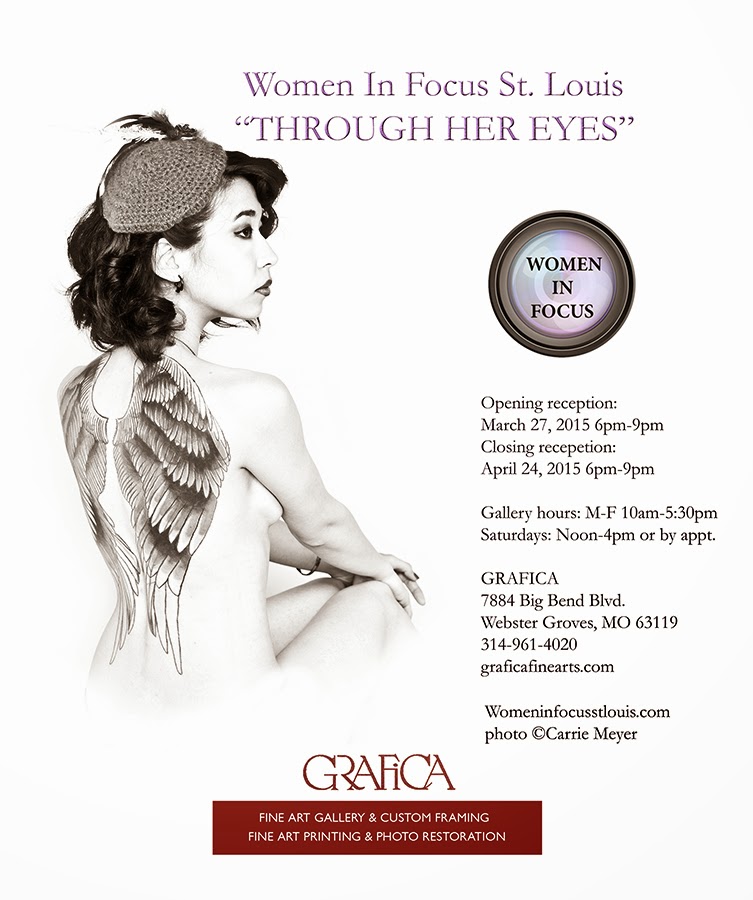 Our first show is taking place at Grafica Fine Art Gallery beginning with an opening reception on March 27th. We could each enter up to three photos, so I selected a nature shot of deer at Jefferson Barracks Cemetery, the band stand by the Muny in Forest Park, and a grittier photo of the graffiti wall downtown to display. I had shot the wall while taking senior pictures of my great-niece last summer. I didn't realize until I looked at the picture on my big monitor that the word "FU*K" was spray painted on the wall (minus the * but with the C.) I decided it would be safest to email the picture to the gallery owner to make sure she was okay with it. I mean, it is a graffiti wall after all, but I don't know how many children come through the gallery. Or other people who might be offended. She reviewed it, and said she is fine with it as is. I have the pictures printed but am waiting for the frames to arrive.

The qualification for having the show at this gallery is that we all must have the photos available for sale. This is a tough call as I have no clue what to put on the price tag. The gallery takes a 50% commission (standard practice), so obviously I have to keep that in mind in the price so I don't lose money on the printing and framing. Of course, I would like to make a little something as well. I don't have the final cost on framing yet, so I'll have to wait until I get that number. However it goes, I am thrilled to be part of the exhibit, and this group of talented women. I anticipate that I will learn a lot from them!

Speaking of photography, the March of Dimes asked if I would be willing to be one of the photographers for their March for Babies walk again this year. I volunteered for the first time last year, and I had so much fun taking pictures. I also talked to a lot of people and realized how challenging life has been for so many of the families. And yet progress has been made, and there was such a sense of hope in the crowd. So of course I said yes. I will pray for a day as beautiful as last year so that they will have a good turnout and raise lots of money.

Posted by Kim Wolterman at 8:56 PM

Email ThisBlogThis!Share to TwitterShare to FacebookShare to Pinterest
Labels: March for Babies, March of Dimes, photography, photos, Women in Focus

It will be interesting to see how quickly your work sells. I think you're a great fit for that group.