On Tuesday the 22nd I took Andy and Megan to Crown Candy Kitchen so they could experience for the first time the yummy goodness of St. Louis' oldest candy store. Normally I get the BLT sandwich, which is so huge that I never order any ice cream to go with it. Megan and I decided to split a sandwich so that we could each get a shake, too. For the second time in a row I actually received a BL sandwich - there was no tomato. I really didn't mind as the tomatoes this time of year are usually not that good, but I probably should have said something. Andy noticed that the people in the booth behind us had tomato on their sandwiches. Strange... Megan and Andy were both amazed at the size of the BL, and of the shakes as well. I ended up taking more than half of my chocolate shake home with me.


We had barely walked in the door when Jim and Katie arrived from their trip to Iowa. Perfect timing! After spending time catching up, we had dinner and then played some card games.

Wednesday night it was our intention to drive through Tilles Park to see the Winter Wonderland lights. Apparently everyone else in St. Louis had the same idea. The cars were lined up from the park all the way beyond I-64, and both exit ramps on the interstate were backed up as far as the eye could see. When we saw a man's car overheat while waiting in line, we decided we were not going to wait to see what kind of additional back log that created. Instead we hopped on I-64 and went to Candy Cane Lane in the city. Located near Ted Drewes, this neighborhood tries to outdo itself each year. Two other streets, Angel Avenue and Snow Flake Street, are in the competition as well. The area is well worth seeing, with the added bonus of being near our favorite frozen custard stand, Ted Drewes. We stopped there for dessert, which in this case happened to be before dinner.

Thursday we headed out early to the Missouri Botanical Garden for one of our annual family traditions of visiting Gardenland Express, the indoor train exhibit that is set up each year at the garden. We all agreed that this was one of their better years. It was not at all crowded, and you could actually spend time admiring each of the different exhibits without a bunch of people in your way.

We decided to see if our lack of crowds luck would hold, and traveled next to the St. Louis Zoo. With the mild weather, I expected it to be packed. But we scored a parking spot along the street right outside the zoo, which indicated that not too many people were visiting the zoo on Christmas Eve. Jim's firm had worked on the design of the new polar bear exhibit, and none of us had seen it yet. It was nice to be able to check it out with the kids along. There is only one polar bear in the pen, but I understand that the males are pretty territorial so he may not have to ever share his space. He seemed content enough, I suppose. At any rate, it was a nice day to stroll through the zoo. 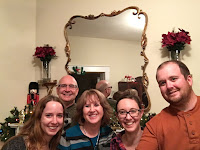 Saturday I invited my sister and her family over to see the kids in the afternoon. They hadn't seen Katie for several years, so it is nice that the timetable worked out for some of them at least. We took one last family photo in front of the fireplace before Megan and Andy left that night to drive the three hours to her mom & dad's house in Indiana. Then at 6:30 Sunday morning we drove Katie to the airport to catch her plane back to LA. Now the house is all quiet again, and I am catching up on cleaning and doing laundry after having company for over a week. But what a great time we had!

Posted by Kim Wolterman at 5:35 PM

When the grandkids arrive, they will love all of this!!!