When I saw my dermatologist (Dr. S.) in late July for my normal (if anything about my skin can be considered normal) six month check-up, I mention that a spot on my upper right chest had not responded well to the cryosurgery he had been doing on it each time I came in. He said it was time for me to see the plastic surgeon again. I would say it was past time, actually. I rely on him to tell me when it is time to get things surgically removed, but in light of recent developments I can see that I will have to be more assertive. Dr. S. then proceeded to burn about 13 spots on my head, chest (including two above the spot I believed to be skin cancer), back, shoulders and arms, and I booked an appointment with the plastic surgeon (Dr. R.) Between his schedule and the trip we had planned to Seattle, I could not get the surgery done until September 16th.

When I arrived at Dr. R.'s office, I also asked him about a tiny spot on my shoulder that had also not responded to the liquid nitrogen. Typically, a benign area will crust over and peel following treatment, whereas skin cancer spots essentially stick their tongues out at the doctor and do nothing. Dr. R. agreed that the small spot looked like a basal cell to him. But he was also concerned about two other spots above the growth on my chest that he was going to remove. He referred to it as a multi focal cancer, meaning the additional two had popped out as a result of the first one. He did not use the word "metastasis", which was somewhat comforting. But this was certainly a first for me. He decided to take all three of the spots in one incision. Needless to say, that was a little more involved than I was expecting, and will result in a longer scar. After that procedure, removing the one on my shoulder was a piece of cake. That made me realize I need to get into the plastic surgeon much sooner than my dermatologist is referring me. Dr. R. also suggested that I might need to go see Dr. S. more often than every six months. Yippee...

There was some pain that afternoon and a little on Saturday, but nothing like when I had the two removed from my forehead earlier this year. In fact, I felt good enough to go and photograph migrating pelicans with my friend Sunday morning. 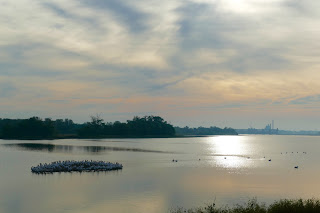 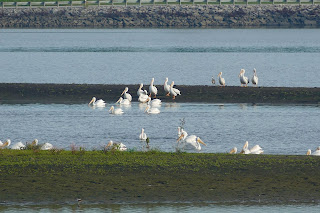 Unlike any incisions Dr. R. makes on my forehead, these two incisions were covered with bandages so I didn't need to worry about clothes rubbing on them or dirt blowing in them. I have to wait for the bandages to come off on their own, and am not supposed to be doing any exercise or movement that may stretch the incisions. The biopsy reports came back that the ones on my chest were basal cells, but the small one on my shoulder was just a mole. That surprised me, as I have many moles and none of them look like that one did. But I would rather err on the side of caution at this point.

In light of the exercise restrictions, it was a good thing that I scheduled my surgery for after the Silver Games in Washington, MO. I played in my first pickleball tournament on September 14th, playing ladies doubles with my friend Audrey and mixed doubles with my friend Leon. In both cases we only won one game out of three, but we had a lot of fun despite the disorganization of the tournament. We arrived at the sports center at 12:00, and games were supposed to begin at 12:30. In fact, they did not begin until 1:00, and Leon and I did not finish our last game until 10:00 that night. Frankly, by then we did not really care if we won or loss. But it was still pretty fun to hang out with many of my pickleball friends for the day.