Following a massive breakfast at Pancakes on the Rocks, so named for its location in the oldest part of Sydney, we stopped in at the information centre to get some advice on tours. We knew that we wanted to get out to the Blue Mountains, but it was a question of traveling on our own by train versus hooking up with a tour group. In the end, we decided to go with a small tour company that only takes 20 passengers as we liked the variety of activities that was offered by them - including a couple that we would not be able to do on our own. Our original plan was to go on Monday to avoid weekend crowds. But the woman at the centre assured us that Saturdays are a good pick because locals go on Sunday due to greatly reduced train ticket fares. So we booked for tomorrow, which is Saturday. 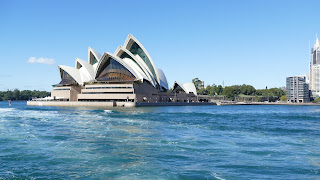 Today we traveled by ferry to the Taronga Zoo. Jim is working on a zoo project that includes the possibility of transporting guests by gondola, and the Sydney zoo has that already in place . Opened in 1916, Taronga has over 4,000 animals located on 69 acres built into a hillside. We arrived at the ferry terminal after a short 12 minute ride from Circular Quay and headed for the gondola lift. What a breath-taking ride to the top of the zoo! 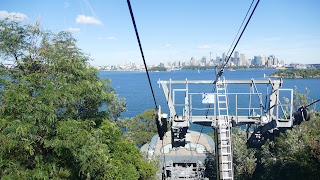 The zoo is nicely laid out, if a bit challenging for some folks with its hills and steps. Around every corner was an amazing view of Sydney Harbour. The animal displays were guest-friendly, and you can tell that the zoo caters to families with children. They even have a couple of playgrounds that were being extensively used while we were there. 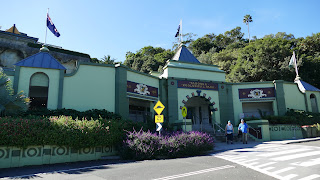 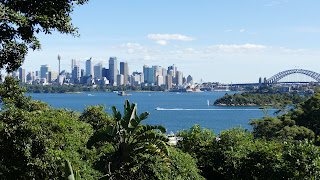 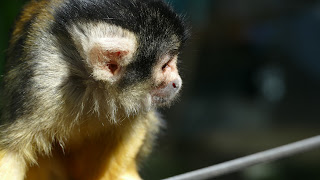 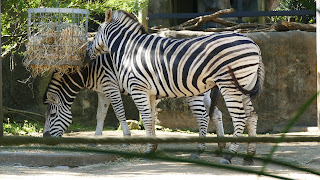 After we tired out, we took a ferry to the community of Manly, where we enjoyed a very late lunch along the waterfront. We will be turning in early tonight as we need to meet our tour group at 7:15 in the morning. We are very much looking forward to tomorrow!
Posted by Kim Wolterman at 4:16 AM