Jim's fraternity had a reunion last weekend in conjunction with the Iowa State vs. Kansas football game. We drove up to Ames on Friday, arriving in time to check into our hotel and freshen up before going to the Iowa State University Alumni Building to meet up with the guys and their significant others. Some people we had not seen in nearly 40 years, while others we met as recently as the Total Eclipse in August. It was great to catch up, and it helped that I am Facebook friends with a number of them. It certainly makes it easier to break the ice. 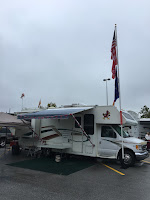 While we had beautiful weather on the drive up to Iowa, all of that changed once we got to Ames. There was a gentle mist on Friday night, but Saturday's forecast was 100% chance of rain. And rain it did. We tailgated with the group at the motor home of one of the fraternity brothers before heading to our seats. The last thing you want to hear on a crappy day is the announcement of a 30 minute start time. Fortunately we had heard the forecast and came somewhat prepared, but even with some rain gear on it was not the most fun I've ever had. We watched the first half of the game and enjoyed the halftime entertainment before taking off for somewhere dry and warm for a late lunch. Iowa State was leading 24-0 at that point. The final score of the game was 45-0. Wow!

After lunch we drove to Des Moines with another couple, meeting up with some friends who live in the area. Jim and I spent Sunday walking (or perhaps I should say driving) down memory lane. We found the school where I attended kindergarten, stopped by Holy Trinity which was our home parish and where I went to school 1st-7th grades, and checked out Meredith and Hoover where I spent 8th-12th grades. Then we drove to St. Mary of Nazareth, where my family attended church when the new parish was established in 1964 on 11 acres of what had been Meredith (of Meredith Publishing Company) farm. This is where Jim and I were married, and had our reception in what was once the Meredith family mansion.

We also visited my old home and stopped at nearby Woodlawn Park where I spent so many hours first as a child and later with my niece and nephews or children I was babysitting. The house has been repainted and the park totally redone. It all goes to show that while you can go home again, home may not look like you remember it.
Posted by Kim Wolterman at 5:33 PM