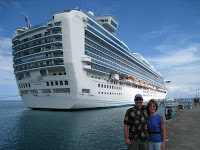 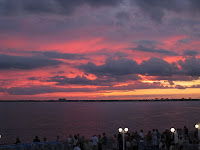 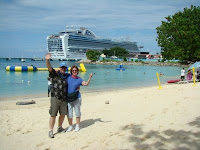 There are many things to love about the newest boat in the Princess Cruise Line. We just returned from a week long western Caribbean cruise aboard the Ruby Princess on its maiden voyage. In celebration of our 30th wedding anniversary, we traveled with the couple who sang at our wedding. Paul is a fraternity brother of Jim's, Kathy graduated from high school with me, and we all attended Iowa State University. A hurricane struck Grand Cayman two days before we set sail, but the Captain simply changed the order of the islands we would see to avoid it. We set sail out of Ft. Lauderdale to Cozumel, where we enjoyed a snorkeling expedition. From there we traveled to Grand Cayman, and we really didn't see any signs of recent damage. Jim and I decided to do a submarine/snorkel excursions since our Snuba trip was canceled due to the route change. We boarded two vans which took us to the submarine. A group of Japanese tourists from our ship was also signed up for this excursion, along with their translator. We boarded the sub, which had a series of benches each seating two people running along both sides so that you had ample opportunity to look out the windows which ran from the floor to the ceiling. We headed out and our Jamaican guide was busy showing us a shipwreck, when all of a sudden he said, "We have a problem. Not a big problem...but a problem. We left the Japanese translator behind." So we had to head back to the dock to pick her up only to find that not only did they leave her behind, they forgot the whole second van! It was pretty funny. The next day found us in Ocho Rios, Jamaica. We had not scheduled an excursion here so we just went into town where we watched a native dance show, saw a woman rolling handmade cigars (and yes, it really was only tobacco), and then went to Jimmy Buffet's Mararitaville. Where I found out exactly how he came up with the lyrics "Wastin' Away Again in Margaritaville." One of their "Special Margaritas" will really knock you on your butt. Whew! Our final stop was Princess Cays, which is a private area owned by the Princess Cruise Line. There we found some great snorkeling and had barbecue.

Back to the Ruby...this ship is beautiful, and there is something special about having a cabin that no one else has inhabited, towels no one else has used, a balcony that only you have stood on. Very memorable. The food was pretty good, the decorations were gorgeous and the entertainment was exceptional. From music and dance groups, to comedians, magicians and a ventriloquist, there was something for everyone. We had selected the second seating for dining, which was at 8:15, and we were placed at a table for 8. Besides the four of us, there was an older couple from Wisconsin and two ladies from Scotland, who were just delightful.

Our trip back home from Ft. Lauderdale had a couple of interesting things occur, which I will write about later. In summary, this anniversary cruise was truly fit for a "Princess".
Posted by Kim Wolterman at 7:39 PM

That is some kind of a vessel! It looks like a huge floating condo complex. In that one picture, it looks so close to the shore - how can that be?

The places you went sound fabulous! Like no big deal, we'll just change this route completely around. That's pretty amazing.