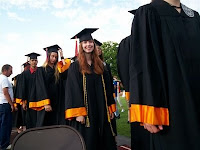 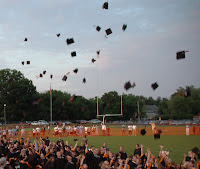 Friday night was the graduation ceremony for our second and youngest child. Out of town guests began to arrive on Thursday, with more driving in on Friday. Friday morning and part of the afternoon was spent at Webster University putting up the eight photo boards we had worked so hard on. We had to decorate the "cubbies" which would house the boards for the evening, and of course re-attach the wayward photos which refused to be held in place by the glue dots. We definitely disrupted the productivity of the decorating crew as, one by one, they stopped what they were doing to take a look at the photos. We had photos of the students when they were young as well as ones where they were involved in high school activities. More on the all night party in a future posting...

Friday was a little more hot and humid than the rest of the week had been, but by the time the ceremony began at 6:30, there was a little breeze and it was fairly pleasant out. My sister-in-law and Andy went with me when I dropped Katie off at 5:15 for the student preparation, and we went on to the football field to save 8 seats. Locating excellent seating behind Katie's best friend's mom, we spread out towels out to save the seats for the later arrivals. A little after 6:00 a lady came up the bleacher steps and asked if the seats behind us were taken. A woman off to the left was, in fact, saving the seats for her elderly parents. The new arrival was having none of that. She loudly declared that she just didn't think that was right, that everyone wants to see their relation graduate, and she proceeded to climb over the couple at the end of the bleacher and take the seats anyway. As the man on the end remarked. you can't expect to show up at five minutes after 6:00 and expect to get good seats. It was a good thing this rude woman didn't covet the seats covered with my beach towel, because you probably would have seen me on the 10:00 news. No one was taking away the seats I had been sitting in the hot sun to hold for my elderly in-laws. As it turned out, Jim's folks elected to take advantage of the folding chairs set up for the handicapped down on the track. It was not the best location for viewing, but at least the seats had a back and they didn't have to climb the bleachers. So we gave our extra two seats to the lady behind us who had lost hers to the seat snatcher.

The ceremony itself moved along fairly quickly considering that there were over 330 graduates. The gal selected by her classmates to give the speech did an excellent job summing up their experience at Webster Groves High School. She cracked a few jokes and offered a touching memorial to their classmate who died unexpectedly this spring. As Katie was near the end of the alphabet, I was a little dismayed by the handful of parents who got up and left before all the graduate's names had been read. We sat patiently through their child's name being read, but apparently they didn't feel the need to extend the same courtesy to the kids at the end. And yet we wonder why some kids are so rude. Look at the example some adult set for them.

Saturday afternoon we had our family celebration of Katie's graduation. The weather held for us and we were able to enjoy the gardens in the backyard. It hardly seems possible that Andy's graduation was six years ago, and now we are sending our "baby" off to college. One definition of commencement is "a beginning; a start". For Katie, she will be starting a whole new life as a college freshman in Chicago, learning to share an apartment style dorm with three total strangers, managing her time between classes and studying, and experiencing the freedom of having her parents five hours away from her. Having been through this one time before, I understand that it is a lot like sending your child off to kindergarten for the first time. You know that this is something that has to be done for your child to learn and grow, but you also realize that the child you drop off at the door will be forever changed by the experiences of the teachers and other children she comes into contact with.

For Jim and me, this is a beginning to a different phase in our marriage. With no children and the affiliated activities around on a daily basis, we will have an opportunity to focus exclusively on us and the things we want to do and see. So while a part of my heart grieves for the baby I used to hold in my arms and the little girl who used to hold my hand, my mind understand that I have done my job to raise Katie to the best of my ability. The next step is up to her.
Posted by Kim Wolterman at 9:09 PM

Oh...... you had my hackles up against the rude people, then you grabbed and twisted my heart.

Good job, Mom! You should have been the parent valedictorian.