Two Girls and a Dog 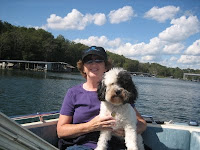 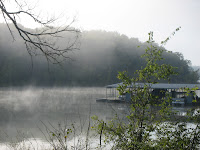 Okay, so it was actually two women and a dog, but that just doesn't have the same ring to it, does it? My friend Carol's parents have a house at Table Rock Lake, so she and I drove down there for the weekend. Kirby the dog went along for the ride. He just didn't realize how long a ride it would be. He's actually fairly good in the car, but he has to sit on someone's lap. Since I was driving, Carol got doggie duty. I tried to warn her ahead of time, suggesting that she drive so I could hold the dog, but she wanted me to drive. Passenger beware, I always say. It's not like the dog is going to lay down on your lap and sleep for five hours straight. I suspect Carol is now even more thankful that she has a cat and not a dog.

We arrived at the lake around 4:00 Friday afternoon, and it was a beautiful day. We threw everything in the house and walked down to the boat dock. We were able to take a nice, relaxing trip down part of the lake before heading back in to make some homemade pizza for supper.

Saturday we ate a leisurely breakfast and enjoyed our coffee and tea on the deck watching the day come to life. In the afternoon a long boat ride exposed me to another section of Table Rock Lake. We never did see the whole length of it. This morning the warmth of the water met the cold air, resulting in an eerie mist upon the water. My photos don't do it justice. It was very cool, pardon the pun.

The most interesting part of where we were staying was the nearby airport. It consists of a grass runway, with the planes taking off directly over the water. One plane landed while we were there, though there were two planes at the airport this morning. There is also a series of 4 or 5 hangers, so perhaps other planes were on the premises as well. I think I'd be wanting pontoons instead of wheels on my plane!

The house where we stayed has no television and only local phone service. It was such a welcome relief to leave behind all the trappings of our hectic St. Louis lives. And you know what? I didn't even miss them.
Posted by Kim Wolterman at 8:17 PM

Kirby looks like he's very sea worthy. It is nice to get away from all the things that constantly impose information on us. Glad you had a nice trip!