A Tourist Experiences a Terrorist 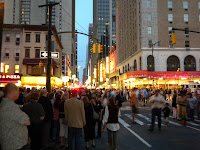 Jim and his partner Ted has a business trip to New York last week sponsored by a company that sells commercial lighting. The local lighting rep, Vicky, was taking them and Ted's wife, Jill, and I tagged along. We flew out Thursday morning, and in the afternoon we walked down to Times Square for a bit before heading over to the lighting company for a buffet and presentation on the art of lighting. On Friday the guys were in meetings all day, so Jill and I headed out to play tourist. We walked the Brooklyn Bridge, which is something I have always wanted to do, visited South Street Seaport and had lunch on Pier 17. We saw Ground Zero and the sobering memorial at St. Paul's Church, which remained standing following the collapse of the twin towers, even though it is right across the street from where they stood. Following a brief respite at our hotel, the art deco New Yorker, we met up with the guys for a margarita party at 5:00. This was followed by a dinner harbor cruise on a private boat for the meeting attendees. It was wonderful!

Saturday the lighting company treated us to brunch at the restaurant at Bryant Park, which was very tasty. Then the five of us went back to Seaport as Ted knew of a ticket office where you can obtain 1/2 price tickets to same night Broadway shows beginning at 11:00 a.m. The booth in Times Square doesn't begin selling them until 3:00 p.m. and the line there is tremendous. We walked right in at Seaport and were able to get tickets to "Billy Elliot". I had suggested the show because I have heard rave reviews about it, and it won't be coming to St. Louis until 2011. After securing tickets for the bargain (?) price of $70 each, we went to Battery Park and the new Teardrop Park. (This is what happens when you travel with landscape architects - you spend a lot of time in the parks.)

We had supper at John's Italian Restaurant on 12th, and then hailed cabs to take us to the Imperial Theater, which is located at 249 West 45th Street between 7th and 8th. The cab dropped us off on 7th at the corner of 45th, because 45th was closed by a barricade. Thinking the road was just closed to vehicle traffic, we began to follow others around the barricade only to be told we couldn't go down the street. "There's a bomb threat," one lady told us. Not knowing exactly which block the theater was in, we walked around the block to 8th street. The sidewalks were jammed with other theater-goers and regular tourist traffic, and we all came to a screeching halt at the corner of 8th and 45th. At this time we could see the abundance of police and emergency vehicles on 45th. Waiting for a walk signal, we crossed 8th and walked a half block down 45th to regroup. It was 7:50 and the show started at 8:00. I called Andy and Katie both, hoping to find someone who could get on the internet to see what was going on. Neither picked up their phones. The police finally announced around 8:30 that "Lion King" was canceled (the vehicle with the bomb was near the Minskoff Theater located at 200 West 45th) but the other shows would have a late curtain. We sat on the curb to wait.

In the meantime, 8th was kept open to traffic and we were all allowed to hang out on 45th. The other three went into Charley O's on the corner of 8th and 45th for a drink and Jim and I waited for information. At 9:00 the police said that the shows had begun and anyone in the theaters already were able to see them. Supposedly the theaters had taken a head count, determined there were enough people present, and decided the show must go on. Too bad for the rest of us outside. When we told the others at Charley O's what they said, another couple piped up. They had been in the Minskoff early to see "Lion King" and at 7:20 the theater was evacuated. They said no one was allowed to remain in the theater. So why did the police lie? To get us all to leave? I sure as hell would have left had I know there was a real bomb. Because we were allowed to remain so close and 8th was never closed, we all figured it was a false alarm - that perhaps there was an abandoned vehicle they were checking out or something. But we didn't know the seriousness until the next morning, so we hung out until 10:00 before we decided there would be no show after all.

The next day we immediately turned on the news and found out there had indeed been a bomb in the vehicle. What was more shocking was the fact that Times Square had been evacuated. Seriously? The heart of Times Square is actually a couple blocks from where the car was located. We were a baseball throw away from the car, and we were allowed to just hang out there. As I said, vehicles continued to crawl past on 8th street. We all definitely would have been the most impacted had the bomb gone off.

Because our flight was not scheduled to leave until 4:30 in the afternoon Sunday, we checked out of our rooms and left the bags with the hotel as we headed off for bagels. From there we went to High Line, a new trail built above ground on an old train trestle. It is really cool and I highly recommend going to see it. We were really enjoying ourselves until Ted got a call from American Airlines telling him that our flight had been canceled. The best they could do was to get us out Monday afternoon. They said it was canceled due to the bombing, so we didn't know if something else had happened, or had American been threatened? Spaids have younger children, and one of them was scheduled to leave for 6th grade camp on Monday. More importantly, Jill was supposed to be one of the drivers. They really needed to get back. They arranged to use frequent flier miles on Southwest, and took a train to Long Island's airport, then a plane to Buffalo, New York before flying home to St. Louis.

Jim, Vicky and I just had to wait it out. We finished walking the trail and then I took them to Lombardi's for some great pizza. We walked back to Bryant Park for a drink, then back to the hotel. Monday we again checked out, had some breakfast, then walked over to Macy's. It is such a huge store as it is seven stories and covers a whole city block. We ended up going to the airport really early since we didn't know what security changes, if any, had been made. Plus American had assigned seats to Jim and Vicky, but not to me. As we waited at the gate for an agent to show up to check people in, the next gate over began making announcements. For the flight to Dallas, the agent was looking for 15-20 people to volunteer to give up their seats as they were overbooked. Now, these are not large planes to begin with, so what was American thinking? Before it was all said and done, she needed 30 people to give up their seats. That's when I began to worry that I might not get on my flight because everyone from Sunday night was going to be looking for a seat. I finally snagged an agent at 3:00 who took pity on me and gave me a seat assignment. At that point we headed to the bar for a well-deserved drink. The flight home was fortunately uneventful.

When I heard this morning that the POS, oops I meant suspect, had been apprehended at Kennedy Airport Monday night, all I could think was thank God. Thank God they found him, and THANK GOD he was not at Laguardia with us Monday night. Once close brush with him on Saturday night was enough.

And just think - I get to go back to New York in 3 weeks. This has certainly dimmed my enthusiasm somewhat!
Posted by Kim Wolterman at 4:19 PM

Quite an adventure you had there! So glad that you're alive to tell the tale!