Last week I decided that I was going to send our daughter a care package. I thought long and hard about what to send because there is a Walmart right outside the gates of her university in Shanghai. I know - how sad is that? So she can get pretty much whatever she needs there. But then I realized that since they don't celebrate (?) Halloween there, she probably could not buy any Halloween candy at Walmart. Thus was born the idea to send her a black and orange themed package. I purchased candy, some Halloween socks and some other fun novelty items to send that I thought the students from other countries might enjoy and boxed it all up.

After confirming that the "What can Brown do for You?" folks do actually deliver to China, yesterday I headed over to my neighborhood UPS store. The first thing the guy wanted to know is Katie's phone number. Since her Chinese phone number is about 14 digits long, I don't have it memorized. Nor do I have it in my cell phone since I hope to never call her in China. Strike 1. After weighing and measuring the box, he consulted his computer and proceeded to tell me that I should take it to the Post Office because they (PO) would only charge me $76 to ship the box. Strike 2. The downside, he added, is that while it would travel from here to China via the PO, once there the Chinese mail service would take over. No telling how long - or if - the box would get to her. But he was pretty sure it would. So I asked him what UPS would charge to ship it. Are you ready? $138! Strike 3 and your out. Or I'm outta here. I told him that I am not spending $76 much less $138 to send $10 worth of candy and other sundry items to my daughter. It's not like I'm shipping Mrs. Wryly's awesome cookies or anything. Get real!

I looked online and it appears I can get the small PO box and stuff it with as much as will fit in there. That box will ship to China for $13.25. That still seems like a lot, but I'll probably check that option out. The irony of the whole thing is that as I was pulling out of the parking lot, a PO truck pulled in front of the USP store and the driver entered the business. Have they joined forces or something? 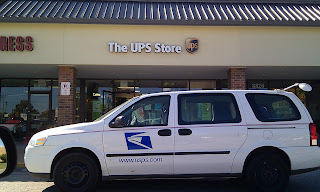 Posted by Kim Wolterman at 8:43 PM

Thanks for the commercial! I recently shipped 5 lbs. of cookies about 500 miles for $11.00. That seemed like a bargain.