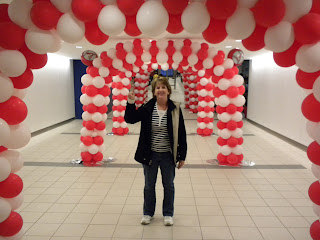 Today I was passing through Lambert International Airport in St. Louis when I came upon this balloon archway supporting the St. Louis Cardinals efforts in the World Series. It is such a fun tribute to the Cardinals, and I found myself wondering if that is the concourse the team will be coming through when they come back from Texas.

I flew down to Charleston today for a visit to Folly Beach, and I went to a bar/grill for supper and to catch part of the game. Some guys in the bar, of course getting louder the more they drank, began to first make fun of this series because, after all, who cares about the Cardinals or the Rangers. I could ignore that, and their terrible attempts to sing along with the music in the bar, until they started the name calling. When Albert came up to bat, one of them shouted that Albert was just a fat, stupid fag. At that point I decided to leave and finish watching the game in my townhouse. It is hard to believe how ignorant people can be.
Posted by Kim Wolterman at 9:14 PM