Along Came a Spider... 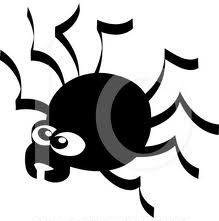 Katie and I were out running errands today and I noticed a spider on the windshield of the car as I was driving. At first I thought it was on the outside of the car, but no such luck. It traveled up the windshield to my sun visor. Now, if you think people who text and drive are dangerous, you haven't seen me trying to capture a spider before it lands on my lap! Fortunately the stoplight turned red, and Katie handed me a wipe to squish it. The spider was having none of that and instead dropped onto the seat beside me. As I was squealing with disgust I noticed the man in the next car smirking at me. If I could have gotten my hand on the spider, it would have ended up flying out my window and into his car.

By now the light had turned green, so I crossed the intersection into the restaurant where we had planned to eat lunch. Opening both the car doors on my side of the car, I could not spy the spider. I did see the single strand of a web in the back seat and brushed at it. All of a sudden a spider came sliding quickly down a different strand and out of the car. An escape artist! But at least he was gone.

On the drive to our next destination I saw a tiny spider crawling up my side window. I could almost hear it saying, "Momma, momma". Guess our "he" spider was probably a "she" spider. How many eggs do they lay anyhow?
Posted by Kim Wolterman at 9:35 PM

You might be on the way to finding out.