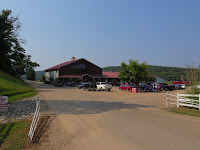 Saturday we drove just south of Sullivan, Missouri to join 15 others from Jim's company on a float trip. Several people chose canoes as their flotation devices, and a couple of people who had small children along took advantage of the double kayaks. The rest of us selected single kayaks, which ended up to be a good call. Despite the heavy rains this spring and early summer, the Huzzah River was quite low. I have decided it is just not possible to gracefully get out of or into a kayak, so I was grateful I only had to do that a few times to get over the especially low areas of the river. We had packed lunches, so we stopped on a sand bar (more accurately a rock bar) to eat along the way. The scenery was beautiful and the river was not crowded, so I really missed my camera which I left in our cabin while we floated. Going on my Christmas list this year is a waterproof bag so I can bring it along in the future. I didn't even take my phone out of town with me as there is no cell service at the camp ground.

It took us about five hours to float six miles. No one was in a rush, and it was a cool, overcast day that was perfect for mild physical exertion. I liked the fact that each water craft had its own mesh trash bag, and I noticed that the river was not nearly as polluted as when we have floated in the past. Having said that, we did grab some trash left by others who obviously had no idea what to do with the mesh bag. The people we did meet along the river were pretty cordial, though that changed when we got closer to the camp ground where we were staying. There were about five rafts tied together, of course right in the middle of the river. On of them must have mentioned that our group was coming, and the front woman said, "Well, they can just go the f_ck around us!" Nice - they had a small child with them as well. And she obviously was unaware of my lack of steering skills, or she might not have assumed that I could safely go around her. With some effort I did manage to get past without taking anyone out with my paddle, though it was tempting...

Back at our camping area, we hung out for a bit before striking up the grill for chicken shish kabobs. Four of us shared one of the A-frame cabins, and everyone else had tents. The food was cooked outside our cabin since we were the only ones who had a refrigerator, albeit a half-sized one. We were intrigued by the fact that the two A-frames next to us were occupied by ten guys and one gal. The stories we came up with were probably way more exciting than what was actually going on in the two cabins.

After dinner we went down to the tent camping area and sat around a fire. Again, we were blessed with the weather as it was cool enough to enjoy a fire. Breakfast the next morning was cooked over the fire pit, then everyone packed up and headed on their way. Jim and I stopped in Sullivan as they have painted canoes along the main street. I have heard about them, so it was fun to be able to snap some pictures. What a fun way to play off of the fact that the area is known for being a great place for float trips!
Posted by Kim Wolterman at 12:22 PM

What a great culture your husband has created at your company! I think it is the exception--certainly not the rule--that employees would choose to spend leisure time with the boss and his wife.

Leave it to you to find painted objects to photograph! Very clever canoes!