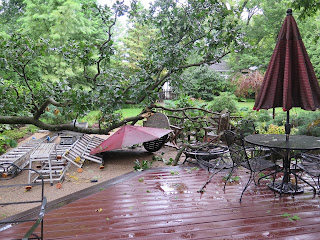 I just can't make this stuff up. Tuesday afternoon a storm blew in, complete with high winds and heavy rain. I heard a thunking noise outside the house and immediately knew what had happened. After all, I have already had two trees fall down within three months so far this year. The sound had come from the back yard, so I cautiously peeked out the bedroom window. A large oak limb had broken off of one of our trees, smashing onto the patio. I offered up a thankful prayer that this time only our property had been damaged. Or so I thought. Once the rain let up, I threw on a raincoat and took my camera outside to survey the damage. Crap! The limb caught part of the neighbor's fence in addition to busting some of our stuff. This would be the same neighbor whose car was totaled when one of our trees fell on it Good Friday. He and his wife were out of town all week taking their oldest child off to her freshman year of college. We have not had a chance to discuss the latest calamity yet. 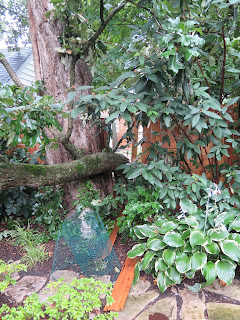 We had a bid for the tree removal on Friday (the earliest they could come out due to all the storm damage), and today all the debris was removed. One of the table umbrellas was busted up, as well as the slats on one of the wooden chairs, but remarkably that was all the damage that was done to our property. The painters (who are still here, by the way) had a stack of ladders on the patio, and one of their ladders was bent. It may be repairable, I don't know. The ladders probably saved our actual patio surface from being damaged by the limb. One section of the neighbor's fence will need to be replaced as far as I can tell. We continue to endear ourselves in the neighborhood, one tree at a time.

The tree professionals said that the drought we had in recent years caused the trees and their limbs to weaken. When we have a wet spring like we did this year, the trees produce an excessive amount of leaves so in a heavy storm the limbs (or entire tree) just give out. That certainly makes sense. This latest tree incident is complicated by the fact that honey bees are living in the tree. They are protected, so the tree cannot just be arbitrarily removed. The hive has to be saved first. We are having an independent arborist come and look at the tree to see if it can be saved, or if there is other damage that might cause further problems for us - and the neighbor. 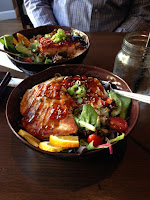 In other news, we celebrated our 37th anniversary Wednesday by playing pickleball. We decided we wanted to do that since we had to miss Sunday night as we were out of town. We have been playing every Sunday and Wednesday. We went out to dinner Thursday night instead. Webster Groves has a new restaurant called the Sushi Station. While I am not too keen on sushi, I knew they had other things on the menu I would like. I tried the Chicken Teriyaki and Jim had the Salmon Teriyaki. They were both excellent! It was an added bonus that we each only ate half of our meals, so we had leftovers for lunch the next day. We definitely will go back and try some other things. If we have any money left after paying the painters and tree company. Ha!
Posted by Kim Wolterman at 3:59 PM

Well, at least no gaping hole in the roof or in someone's forehead. I would have never thought of that leaf thing due to the wet spring, but it does make sense. Happy anniversary! I wish you many more fun years of pickle ball and no more falling tree parts!

Thank you! Looking into removing a few more large limbs to avoid a gaping hole in the neighbor's roof.