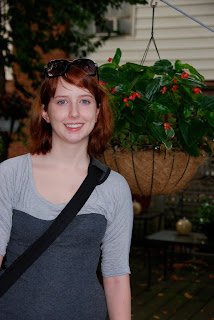 Yesterday morning we took Katie to the airport for her flight to Seoul via Los Angeles. She managed to squeeze everything she needs for 5 months into one large suitcase, one small carry-on bag and a camera case. Unbelievable! I took nearly that much on our cruise earlier this year. As we have done with her and her brother on the first day of school since they started kindergarten, we took a photo on our back porch. (Obviously when the kids went to college we had to take the photo on the day they left for the school year.) It is hard to believe that this is the last one we will take since she is now a senior.

I got one ticked off text message from her in LA because Asian Air had given away the window seat she reserved months ago. Apparently they go by when you check in, and people began checking in at 5:30 a.m. for a 1:40 p.m. flight. What the heck? What is their point in even assigning seats ahead of time then? They may as well operate like Southwest - at least you know what you are getting there.

Anyway, she was put in an aisle seat, which she doesn't like due to the carts knocking you in the arm every time they come up and down the aisle. Of course, they do that a lot less than they used to since they barely serve you any more. I would still take that over a middle seat any day.She had a small little girl next to her, and she said while she wasn't bad she did kick the seat ahead of her most of the trip (12 hours and 30 minutes). And the mom said nothing...I got an email from her this morning letting me know that she arrived in Seoul safely. She will be staying at a friend's house there for 3 weeks prior to heading to Shanghai. She said the only wifi is in Ji's little sisters room, so I don't know how often I'll hear from her. She is buying an international sim card for her phone though, so I'm hopeful she'll be able to call me. The time difference will be a challenge, but we can work around it.