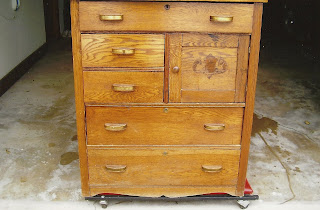 Last weekend we attended the Wolterman Family Reunion at Lake Okoboji in Iowa. As I was already up in Iowa to be of assistance as my mother-in-law had surgery on her carotid artery, Jim drove up separately for the gala. We were excited about this year's reunion because first of all it was being held at a lake, so swimming and boating were involved. But secondly, one of Jim's cousins had sent out an email earlier indicating that she was no longer interested in keeping a dresser that had been Jim's great-grandparents. The email told the story (and included pictures!) of the dresser, and how it had been passed from generation to generation, often serving as a baby changing table - before they came up with all the fancy changing tables on the market today.

If you had an interest in the dresser, you simply had to let Kay know and she would bring the piece from her home in northern Illinois to the family reunion. If multiple people wanted the dresser, then all the names would be placed in a hat and a winner would be drawn. The caveat was that you had to be able to take the dresser home with you. No delivery would be available. Anyone who knows Jim and me, especially if they had seen our house and all the antiques, would know that we put our name in the hat. Besides the fact that this is an antique, we would have wanted it due to the provenance of the piece. Interestingly, Jim's dad was the first one to say he wanted it. Jim and I discussed this, and we decided that if our name was selected, we would give it to his dad. In my opinion, the piece should have been offered to the remaining siblings first.

Jim's folks were unable to attend the reunion, located two and a half hours from their home, due to Lorraine's surgery the previous week. As it turns out, that would make Jim and me the only Woltermans at the Wolterman reunion. Funny... None of our names were selected for the dresser, which went to a first cousin of Jim's up in Minnesota. We were disappointed, but we had a great time at the reunion that day. There was great conversation, good food, boating and swimming. The lodge in the state park was huge, with screened in windows, ceiling fans and loads of tables and chairs. In the evening we headed to a cousins lake home, and didn't get back to our hotel room in nearby Spencer until nearly midnight.

The next morning the cousin with the lake house hosted breakfast, and Jim took off on a jet ski with another cousin. Had I not showered and done my hair and make-up that morning, I would have gone along. I love to jet ski! When we arrived back at the lodge for lunch before heading home, we were told that the sisters (Jim's aunts) had decided that we should take the dresser because the person whose name was drawn was not even at the reunion, and her mom didn't have a car big enough to take it home nor was she at the lodge that day to make arrangements for the piece. So we loaded it up and took it back to Charles City with us. There may be some hard feelings from the one family member, but for now the piece is in my father-in-law's garage where he is anxious for the weather to cool so that he can restore it. It was meant to be!
Posted by Kim Wolterman at 2:43 PM