This weekend was the Crusham family reunion in Cincinnati. We could not leave for the trip until 5:30 Friday night since Jim had to be in Kirksville on a project all day. Knowing that he was already doing six hours of driving that day, I drank a lot of caffeine so I could handle the night driving by myself. I had done a Map Quest to the cousin's house where we would be staying, and it indicated that going over on I-70 through Indianapolis would save thirty minutes over going the I-64 route through Louisville. We always go I-64 because it is far less traveled, particularly by trucks, and is a much prettier drive than I-70. But since it was going to be mostly night driving and we were already arriving at my cousin's house after midnight due to the hour change, we decided to try I-70. Things were going pretty smoothly until we hit the middle of Indiana. Then there was road construction after road construction. And the truck drivers decided that seven miles away from where the left lane actually closed, everyone should already be staying in the right lane. One of them would sit in the left lane and block it. So for miles ahead, no one was in the left lane. Bottom line - the decision to save thirty minutes ended up costing us an hour and a half. We arrived at 1:30 a.m. Grrrr... Needless to say, we did not come home that route, and despite stopping two times made the return trip in 6 hours and 10 minutes. 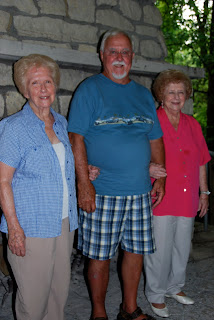 We didn't need to get up early on Saturday, but I was awake at 7:00 anyway. Gene and Rita's eight year old grandson had his first football game of the season at noon, so Jim went with them to that. (Jim said it was a real hoot because there was a little cheer leading squad - eight year old girls dressed in cheer leading outfits - and parents in team booster chairs, etc.) Kathy, Skip and I headed to the park where the picnic was being held at 1:00. The weather was a little hot and humid, but the shelter had ceiling fans which helped a lot. There was a decent turnout for the reunion. Only three of the eight children in mom's family are still alive, which is why Kathy and I feel it is so important to go over when we can. I think the last reunion was three years ago, and since then the twin of the man in this picture has passed on. It was great to see everyone and catch up on what has been going on. My sister and I were just in Cincinnati in April but we only saw a handful of the relatives at that time. 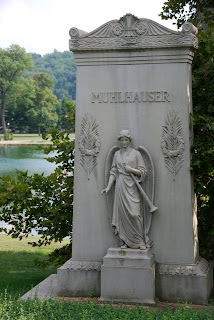 On Sunday my cousin Gina (first cousin once removed!) and I met up to go to Spring Grove Cemetery to take pictures. No one else wanted to go out on a hot, sunny day and join us. Imagine that! Anyway, this cemetery is like the Bellefontaine Cemetery in St. Louis in that it contains the remains of the Who's Who of the city. Spring Grove is amazing, and may outdo our cemetery for the simple fact that the topography is so interesting. It is very hilly, and I lost count of how many small lakes were in it. Even though we were hot, dehydrated and bug-bitten, we had a great time there. I definitely will need to go back as we probably didn't see a fourth of the cemetery. After that I called to see what the rest of my family was up to, since they had been going to Newport on the Levee, a really cool shopping and dining location on the Kentucky side of the river. (Take note St. Louis - you could have an amazing destination like this!) They had eaten appetizers and had drinks outside along the river, so they weren't going to be ready to eat supper until 7 or so. Gina and I had not had lunch, so we decided to go to a little hole in the wall pizzeria. Her brother Tony came and joined us. We shared some great stories and some even better pizza. Yum!

Overall it was a great trip, but it was good to get home last night. The best ending to the evening came in the form of a phone call from Katie. It is the first time I have talked to her since she left for Seoul a week ago Saturday. She just called to ask quickly if I could get on skype, so we ended up finishing our conversation through the computer. God, I love technology! It was so great to be able to both see and talk to her. She is doing well, and loves Seoul. She is hoping that she will like Shanghai as much as she does her current home away from home. So far the only problem she has had is that she cannot buy an international sim card that will work in her phone (the brand new phone that the US Cellular folks assured me would work in Korea and China!) Katie does think that the problem only exists in Korea as they use a different type of card there. I hope she is right, because she will definitely need a phone for the four plus months she is in China. And I need her to have a phone while she is there. Phone home, KT!
Posted by Kim Wolterman at 7:20 AM

Glad you had fun after the bad roadtrip to the reunion.

I'm sure it was great to hear from Kate! That girl knows how to globetrot!