In anticipation of putting our house on the market, we began the process of purging months ago. Three truckloads of items have been picked up by various charitable organizations, our trash cans and recycling containers are consistently full each week, and many other items have been re-gifted to others. Let alone being married for 41 years, we have lived in the same house for 32 years! That is a long time to accumulate junk as well as treasures.

At first it was difficult for us to let some things go, but this has gotten much easier as time has passed. The reality of moving to a new home that has no basement or attic storage, and is 1000 square feet smaller to boot, has sunk in. We simply can't take it all with us.

Our realtor was upfront in telling us that this new group of house hunters does not want to feel as if they have walked into "grandma's house". Ouch! The quilts on the wall must go! Grandma's handmade doilies must go! The antiques should go, if possible. She suggested that any items we didn't plan on taking with us be removed from the house before listing. We took her at her word, and as we had no plans to fill a brand-spanking new home with antiques, we got rid of the antiques except for two heirlooms. We found an auction house who would come and pick up the items and then sell them at auction. They were all removed Mother's Day weekend.

What that means is that we have nothing in the dining room, and no dressers in any of the rooms. So where do we put our underwear??? As my husband says, it looks like a monastery around here. We each have a nightstand for socks and underwear, and a plastic bin under the bed for shorts and t-shirts. It has been interesting to see how little clothing we really need.

We found a couple who are on a mission to place as many free libraries as they possibly can in rural Missouri, so they were thrilled to take a dozen or so boxes of books off our hands. Another lady was happy to get a twin mattress for an AirBNB she was setting up.

We had set aside multiple bins of toys for our kids to go through, which they did the beginning of July when they came to St. Louis for a final visit of their childhood home. Whatever they didn't want was then taken to the Salvation Army. Our son had driven his pickup truck here so that he could take a chest of drawers that once belonged to his great-great-grandparents, so he had room to take some of the teak outdoor furniture as well. He looked like the Beverly Hillbillies when he left here. We will store a couple bins for our daughter as she had no way to take them back on the plane. 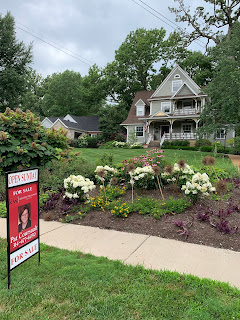 We know that we have to weed out more items, and we have hundreds of record albums to take to a record store and some collectibles that need to go on an auction site. But I'm incredibly proud that we have made so much progress. The house is on the market, and looking better than ever before. It's almost too nice to leave. Almost... Now if we can just get around the HGTV mentality where all the buyers expect to have the entire house in perfect condition with everything they desire in it, but without a large price tag attached.
Posted by Kim Wolterman at 9:48 PM