Our Hearts are Broken 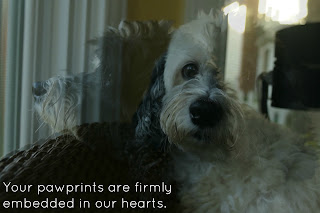 Late yesterday afternoon we had Kirby put to sleep. In the past few days he had seemed more restless, particularly at night. He spent a lot of time on the tile floor of the conservatory, despite the cold temperature. The conservatory was definitely his room, with the couch serving as his throne where he could observe his subjects - the birds, bunnies and cats who traversed through our yard. And where he could watch for his most loyal subject (Jim) to arrive home. It was unusual for him to be spending so much time on the hard floor.

His tumor had continued to grow, but did not appear to be bothering him until yesterday. He had eaten well in the morning and taken his pills nicely for me. He and Jim took their normal long morning walk, and then we went out to do some Christmas shopping. Kirby still seemed fine, and Jim went to the office to do some work, and I headed upstairs to try to look at a website issue I've had ever since some cretins hacked into my web host and ruined four of my sites. Jim got home a little after four, and called up to me that Kirby was bleeding. He must have just been licking the tumor nonstop while we weren't watching. He was bleeding quite a bit, and his muzzle and feet were covered in blood. I knew what that meant as I had discussed this with the doctor a couple weeks ago when he aspirated this latest lump. Mast cell cancer is incurable, and he would continue to get these tumors. It was time to let him go. I called the emergency clinic while Jim was cleaning things up to let them know what was going on. It was the same facility where we had met with the oncologist, so they had a file on Kirby.

We wrapped Kirby up in towels and headed to the clinic. They immediately took us to a private room, which we very much appreciated. We spoke first with a technician, and she took Kirby away to insert a catheter into his leg in preparation for the medication. The vet took a look at him at the same time, and then the tech returned Kirby to Jim's lap. The very young vet then came in to talk to us. She confirmed that we wanted him put to sleep, and then said in light of all that was going on with him she felt this was the best decision. I told her it was hard to let him go though, as he was still eating and playing and wanting his daily walks. She said that it was a blessing that he did not have to go through all the really bad stuff that this cancer can cause. It was just the right thing to say to us. She asked if we wanted more time with him, and we said no because he was really agitated at the point. So she injected medicine to make him go to sleep, and then the final dose for his permanent rest. It was all very quick though he did take one last inhale that was a little disconcerting. She continued to listen for a heartbeat until there was none. 5:45 p.m. It was all over but the crying. Truer words...

After we got home I washed up the bloody towels and Jim's bloody clothes. I texted or emailed close family members to give them the news, asking them not to call us last night. We couldn't handle talking to anyone. Neither one of us ate dinner, or slept much last night. We were missing our bed buddy. When I went downstairs this morning, the first thing I did was check to see if Kirby's water bowl was filled. The pill bottles lined up on the counter made me cry. I woke up my computer only to see the website of the emergency clinic staring me in the eyes. The first email I read was from Merial, reminding me to apply Kirby's flea treatment.

Since I was bawling anyway, I went ahead and packed up all of his toys, leashes, food, etc. I discarded what needed to be thrown away, and hope to donate a couple of unused leashes and poop bags to someone who can use them. I also have an unopened box of flea treatment and sealed Heart Guard pills that I am hoping a shelter can use. We'll see...I can't deal with that yet, but at least it is all out of site. None of it will be out of mind, however.
Posted by Kim Wolterman at 12:23 PM

Although not surprised, I am so sorry to hear this... I was afraid to click on my reading list because I suspected there would be bad news.

I'm glad the vet was able to say something so true and comforting. I think you did the right thing by not putting him through treatments that could have made it a lot more miserable for him, and you did not prolong his suffering with wishful thinking that the situation would turn around.

It is hard to let them go... They are such an optimistic and loving presence in our every day lives. We are so lucky that they adopt us.

Rest in peace, Kirby, you were a genuine "bestie."

I'm sorry for your loss. I know how painful to make the decision about pet euthanasia to our beloved pet and accepting that we need to end up here.